Mayo, Dublin and Kilkenny name their teams but late changes are expected 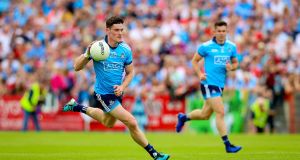 Diarmuid Connolly has been named in Dublin’s matchday 26 for Saturday’s All-Ireland semi-final against Mayo.

Connolly made his first appearance since February 2018 for Jim Gavin’s team against Tyrone last weekend. The St Vincent’s attacker impressed - albeit with both teams already qualified for the last four and hence fielding second string XVs - with 29 possessions, a point and he caught two kickouts.

There are just two changes to the starting team that beat Roscommon in the second round of the Super 8s - both in the fullback line. David Byrne is named to start in place of Philip McMahon and Cian O’Sullivan replaces Jonny Cooper.

Late changes are expected, but in order to accommodate Michael Dara Macauley at midfield and James McCarthy in the halfback line with John Small and Jack McCaffrey, O’Sullivan could very well operate at fullback as named.

After kicking three points against Tyrone, Sean Bulger remains in the squad but there is no place for veteran Bernard Brogan despite his lively impact in the closing stages of that encounter in Omagh. Rory O'Carroll also misses out.

Rob Hennelly will again wear the number one jersey for Mayo, who have replaced the injured Jason Doherty with Kevin McLoughlin. While Fergal Boland is named to start ahead of Keith Higgins. Again though, late changes are expected.

Meanwhile David Clifford has recovered from the back spasm that ruled him out of Kerry’s win over Meath, and he’s been named to start against Tyrone on Sunday. Stephen Enright is named at wing back again, as was the case last weekend.

Albeit Brian Ó Beaglaoich replaced Enright before throw-in against the Royals, and Michael Burns came in for Clifford, but according to the programme neither have held their place.