Joe Canning made his first appearance of the season, scoring 0-8 in the first half 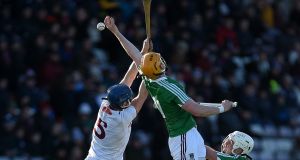 New Galway manager Shane O’Neill encountered little difficulty in getting his first Allianz League campaign in charge of the Tribesmen off to a winning start at Pearse Stadium.

Galway led by 1-12 to 0-8 at the interval despite having played against the strong breeze but while Killian Doyle and Joe Canning exchanged three points in the opening eight minutes, the Tribesmen took over from there and were on top in most positions.

Joe Canning, back for his first game of the year, hit 0-8 in the opening half, seven of them coming from frees after an opening effort inside 30 seconds.

Westmeath made little headway up front with full-forward Darragh Clinton hitting their only point from play in the opening half after 19 minutes.

But their task became more difficult eight minutes from the break when centre-back Aonghus Clarke was sent off for a clumsy tackle on Canning.

Galway vice-captain Conor Whelan blasted home a fine goal into the top right corner after collecting a pass from skipper Padraic Mannion after 17 minutes as Galway pulled away.

Midfielder Tadhg Haran, who made his debut eight years ago for Galway but has only played a handful of games since, produced a superb display in the middle of the field and the Liam Mellows clubman finished with six points from play.

Galway, who have struggled for goals in recent years, had to settle for Whelan’s first-half effort as few other chances went abegging in the second-half.

But they were able to pick off points from all angles, with subs Tom Monaghan and Sean Bleahane also finding the range after coming on as O’Neill got his campaign off to a winning start.

But they will face a much sterner test next Sunday when he takes them to face his native Limerick when both of them will be bidding to make it two wins from two.