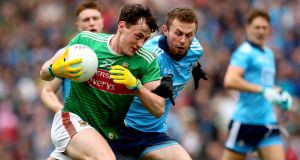 Diarmuid O’Connor in action for Mayo against Jack McCaffrey during the All-Ireland semi-final. Photograph: Ryan Byrne/Inpho

Now after their winter of some minor discontent comes Mayo’s defence of the Allianz Football League.

That title may ultimately be slim consolation after their heavy All-Ireland semi-final defeat to Dublin, only after some unwanted fuss over the source of certain team funding – specifically from millionaire backer Tim O’Leary – the league is now in full focus.

Still Mayo forward and captain Diarmuid O’Connor insists that funding row was never of any concern for the players.

“That was just background noise,” he said. “Obviously it is disappointing, you never want to see your county in the media for the wrong reasons, but I don’t think it was an issue for the players,” he said.

“Most of us were too busy with the club championship, or away having a break. So we were staying out of it, don’t even know the ins and outs of it myself and not too bothered, just focusing on the pitch stuff.

“You had people coming up and asking you but I just tell them the truth, that I just didn’t know much about it. And just focused on the pitch side of things.”

Reflecting on 2019, O’Connor added: We were close enough last year, reaching the semi-final but as players, we are just 100 percent focused on what we can improve on, and what we can do on the pitch, the focus of what we can do.

“Against Dublin, I thought we started fairly well. We put in a decent first-half performance, we were right in the game and then the 10 minutes after half-time, can’t exactly put my finger on it but we just came out a little flat and you can’t switch off against a team like Dublin, they punish you. And they did for that 10 or 15 minute spell.

There is one notable addition to the 2020 backroom team in former Mayo star forward Ciarán McDonald.

“Yeah, it’s great. A very knowledgeable man and great experience, so great to have him around. The lads seem to be getting on very well with him so far, I have only joined back in with the panel in the last few weeks so just beginning to work with him now. But any advice you can get off him would be great, he brings huge experience and knowledge to the squad so great having him.

“He has been doing a lot of work underage in his own club, Crossmolina, doing great things there. It is great to have someone like him around in the county set-up with his experience and knowledge so looking forward to the year ahead.”

O’Connor’s own commitments have changed slightly too; gone is the regular commute from Dublin, as he’s back living and teaching in Mayo.

“I did like the idea of coming home eventually – I mightn’t have come home as soon as I did. Obviously, football played a factor. I’m teaching (PE and maths) in St Gerald’s in Castlebar and it’s great, so I’m happy to be home.”

Club players critical of fixtures plan
A Club Players Association (CPA) survey has shown that 74 per cent of club players are opposed to the retention of the ‘status quo’ option put forward by the GAA fixtures review taskforce and 80 per cent don’t feel they belong to the GAA to the extent that is reflected in the recent marketing campaign by the association.

In addition, only 9.4 per cent of respondents are aware of the task force report being discussed at their own club so far; also, 77.12 per cent would support the adoption of a militant strategy by the CPA executive.

1 Rory McIlroy admits Portrush nightmare was catalyst for his return to the top
2 Garry Ringrose to stay with Leinster as he signs two-year central contract
3 ‘For 25 minutes I ran out of oxygen’: Pepe Reina on his coronavirus battle
4 Karen Robinson Walton: I am looking at him. I say ‘Benjamin, what have we done?’
Real news has value SUBSCRIBE

Garry Ringrose to stay with Leinster as he signs two-year central contract 00:00
Rory McIlroy admits Portrush nightmare was catalyst for his return to the top 21:00
FAI moves to defer portion of salaries as Fifa ponders cash support 20:30
NFL votes to expand postseason following cancelled annual meeting 20:21
‘For 25 minutes I ran out of oxygen’: Pepe Reina on his coronavirus battle 20:06
Crossword Get access to over 6,000 interactive crosswords