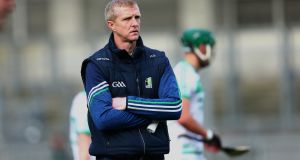 Just days after taking Ballyhale Shamrocks to back-to-back All-Irelands, Henry Shefflin has stepped down as manager. It brings to a conclusion two immensely successful years, which as well as being crowned by successive Tommy Moore Cups, have seen the club go undefeated in championship.

Speaking after Sunday’s victory over Tipperary champions Borris-Ileigh, Shefflin was asked about the achievement and maybe gave a hint of his intentions.

“It’s something we’re going to reflect on. Tommy, my brother, has been an excellent, excellent trainer and he’s heading off to the Kilkenny camogie team. I didn’t think when I took on this job over two years ago that two years later we’d be standing here today. It’s nearly two years to the day exactly that we met up to start for the championship in 2018 - it’s an amazing way to finish it off.”

He also had to guide the club through a bleak period of bereavement after the deaths within 18 months of two players, Eoin Doyle and Eugene Aylward.

Speculation will turn to a possible involvement with the Kilkenny team although the season is about to begin and Brian Cody, embarking on his 22nd season as manager, has already brought in DJ Carey as a selector.

The county hasn’t won the All-Ireland for five years - a comparative famine by Kilkenny standards - but at the weekend in what was an historic first, swept all three club All-Irelands at junior (Conahy Shamrocks), intermediate (Tullaroan) and senior level.

“There’s plenty of hurlers in Kilkenny,” said Shefflin, “that’s for one sure thing. It is great. A bit of confidence. We said that last year, when we got out of Kilkenny we wanted to represent them strongly in Leinster because Kilkenny teams hadn’t done well in Leinster the previous few years. Kilkenny hopefully will be coming.”

Champions Dundalk march on as Cork City remain goalless 22:16
New man Marshall sees Shamrock Rovers past Waterford 21:39
City Island to return to hurdles and take on Paisley Park in stayers’ 20:50
McIlroy takes his foot off the pedal and will skip the Honda Classic 20:01
GPA asks delegates to vote against hurling black card at congress 18:33
Crossword Get access to over 6,000 interactive crosswords