Armagh sprint past Cavan to start with a win

Conor Turbitt scored a superb 1-6 for the promotion hopefuls 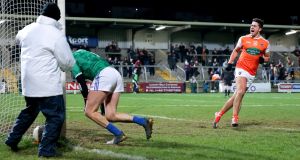 Armagh did not so much hit the ground running as engage in an Olympic-like sprint when they overwhelmed a hapless Cavan outfit in this ultimately one-sided Division Two Allianz Football League encounter at the Athletic Grounds.

Powered by a majestic man of the match performance from new kid on the block Conor Turbitt who plundered 1-6, the Orchard County showcased the pace and penetration that could yet underpin a promotion surge.

Ahead by 0-8 to 0-3 at half-time after Turbitt had lit the fuse with a three-point salvo in the opening seven minutes, the home side profited from the experience of Stefan Campbell, Rory Grugan and Brendan Donaghy in particular as they bossed the second-half.

With the O’Neill brothers Rían and Oisín on fire and Turbitt’s 37th minute goal sending the team into overdrive, the scores flowed freely culminating in a second goal from a 64th minute Campbell penalty.

The black cards incurred by Stephen Smith, Pádraig Faulkner and James Smith only served to rub salt into Cavan’s wounds and it was left to Conor Smith, Conor Madden, Gearóid McKiernan and Oisín McKiernan to salvage a modicum of Breffni pride with James Smith’s late, late goal merely slightly embossing the final score in a game in which little went right for Mickey Graham’s beleaguered side.

Yet there is no danger that the slightest element of complacency will infiltrate the Armagh psyche according to assistant manager Jim McCorry.

“We might have won but we still have things to work on. We feel we can learn from this game,” said McCorry afterwards.