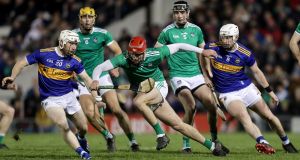 Bary Nash on the ball during Limerick’s win over Tipperary. Photograph: Laszlo Geczo/Inpho

We had to double-check the score on the final whistle and again after chatting with both managers. What just happened?

Liam Sheedy sounded perfectly pleased by the end result, confident his All-Ireland winning team were right where they wanted to be, the game providing ample lessons and no excuses.

“I’d take huge encouragement from what I’ve seen, especially in trying to build a competitive panel for what lies ahead,” said Sheedy. “It’s early days, we’re not as far on as we would have been this time last year, physically, but I’m delighted with the attitude of the boys, happy where I have this group at the end of January, blooding some new players too.”

John Kiely wasn’t much bothered by the end result, his primary concern being what happened to the defending league champions in the first half.

“T’was shocking, very poor,” he said. “For whatever reason we didn’t turn up, found it very hard to get to the pitch of the game, couldn’t get our passing going, not winning puck outs.

“Once I got the reaction in the second half, we were happy. Had we run out two point losers I would have got over it, it wouldn’t have been the end of the world. We’ve a chance now in the next couple of games to make sure what happened in the first half doesn’t happen again.”

So what happened if they both felt so happy?

We came with the spirit level and yardstick and quickly found the All-Ireland champions in the same conquering mood they finished off last summer, Limerick producing a paltry 0-4 in the first half.

Nine points ahead, Jake Morris stretching it out to 10 shortly after the restart, Tipperary were then outscored 2-10 to 0-5 in the second half, Limerick winning by two points to the mild surprise of the 11,867 in attendance.

Two goals – the first from Aaron Gillane (on 49 minutes) and then replacement Gearoid Hegarty (on 56 minutes) – brought them level, and although Tipp briefly rallied again, Limerick didn’t back down, the two teams who between them won the three big hurling prizes of 2019.

Jason Forde, who finished with 0-10, had a late low free at goal in the final minute to steal back a potential winner, only for that shot to be deflected onto the crossbar and sprayed back into play, and suddenly that was that – a fourth win out of five for Limerick over their Munster rivals in the last 12 months.

How that happened was pretty obvious: Will O’Donogue came off the bench at the end of the first half and lorded midfield for much of the second (picking up two yellow cards in the process, the second in the final minute); Cian Lynch, captain on the night, also demanded more possession and with a little more accuracy (Limerick also shot 14 wides, to Tipperary’s six) the winning margin would have been more. Gillane had another goal chance blocked down.

“We had a short, simple conversation at half time,” Kiely explained. “There was no paint stripped off the line that we just weren’t doing the basics, and just look for some reaction. And we got that, their effort went through the roof compared to the first half. We managed to get our hands at the ball, ran at them and created some chances, and while our shooting still wasn’t good, we did manage to take enough.

“Will (O’Donoghue) is just back the last three weeks, that was his first match in a while, but he’s an abrasive player, he likes to get stuck in, and broke up a good bit of play.”

Gillane finished with 1-6, David Dempsey and Diarmuid Byrnes also inspirational in that second half: “It’s nice to be finishing so strong, but I’d rather not be coming from nine points down, at half-time, not hurling for the first 35 minutes,” Kiely added.

Sheedy still saw nothing positives, especially for first league starters Bryan O’Mara and midfielder Paddy Cadell, with plenty of fresh faces off the bench too (Séamus Callanan wasn’t called on). John McGrath, Cadell and Willie Connors also scored from play to help extend that lead to nine points by the break, 0-13 to 0-4.

“Yeah, Limerick bossed the terms of the second half, shut down our puck outs, and were clinical in their finishing,” Sheedy admitted. “But for us, to have played opposition like that is a really good outing for us, we learned loads, we’ve got some players to come back. You can train all you like, but playing teams like Limerick is where you learn the most.

“We came up just short, but very happy with how we tried to apply ourselves throughout the game, right to the last minute. There should be really good competition over the next number of weeks trying to get a place on the pitch, and ultimately that’s what I’m looking for in 2020.”