Sheedy admits Kelly sending off was factor in Tipperary win 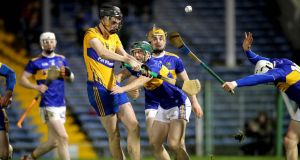 Two goals in as many minutes in the second half by new captain Séamus Callanan helped Tipperary run out easy winners in the end on Saturday night but their manager Liam Sheedy admitted that the 43rd-minute sending off of Clare’s Tony Kelly had a significant effect on the outcome.

Kelly had scored his second point with a beautifully executed sideline cut in the 41st minute, reducing Tipp’s lead to five, but shortly afterwards was dismissed by referee Colm Lyons for a high tackle on Paudie Maher.

“It was absolutely accidental, it was unfortunate for Tony but it had a massive bearing on the game,” Sheedy said afterwards.

Everyone wants to hit the ground running, but for Tipperary the need was arguably more pressing: home advantage, under new management and having lost their last three competitive games against this opposition in last year’s league, championship and the recent Munster Senior League final.

Now it’s Limerick next on their agenda next Saturday night in the Gaelic Grounds.

“This is the [Division 1A] that you live in,” Sheedy pointed out. “It’s really high-powered, it’s really tough and you’re going in to play the All-Ireland champions. It’s another learning process and we’ll get a chance to try one or two new players because we’ve got to build a panel and we’ve got to try and build a squad.”

Callanan finished up with 2-7, all of the points from placed balls while his two goals were the result of fluent attacking movement by his colleagues in attack. The first came after Jake Morris and Robert Byrne combined well to set up a relatively easy chance, the second from a pass by Morris – both expertly finished.

Sheedy was “delighted” by the display of his new captain, but also by the response of all the players to the defeat just a fortnight beforehand, to the same opposition, in the Munster League final. He pointed out, too, that some were in Fitzgibbon Cup action during the week.

“Séamus is a top-class guy, I’ve known him for years, he’s really, really good, he applied himself well,” said Sheedy. “But look there was a young guy beside him, Jake Morris, he’s played three games in six days. It’s really, really tough, he’s only a kid and I thought his leadership on the inside line with some of the possession he won and some of the balls he won was very, very impressive too. It’s not easy for these lads, Robert Byrne and Jake have had the two matches in the six days.”

As with Tipp, Clare still have some front-line players to return from the treatment room but had been at a higher pace in recent weeks, judging by results.

Joint manager Donal Moloney didn’t see the red card incident and had been told “it seemed to be quite harsh” but he wasn’t using it as an excuse for the end result.

“It was a tough night for hurling,” he said in the tunnel as sheets of rain continued to sweep across the turf outside. “But Tipp acquitted themselves very, very well. We have no complaints, they were the better team by far on the night.”

Tipperary led by 0-13 to 1-3 at the interval, Pádraic Maher particularly impressive at the back, Breen doing well at centrefield and Callanan, Noel McGrath and Morris always sharp up front.

Clare duly made three changes for the second half and one of the new arrivals was Podge Collins who got on the scoresheet within seconds of the throw-in.

The key scores arrived in the 49th and 51st minutes thanks to those shots scythed to the net by Callanan, who could afford to tap a late penalty over the bar with the issue already decided.