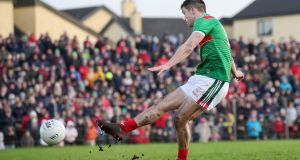 Mayo’s Brian Reape is one of the fringe players to get a chance on the opening weekend of the Allianz League. Photo: Bryan Keane/Inpho

Division One (all games Sunday, unless stated)

Reading into line-ups this early is probably silly but the fact that James Horan has named a team of generally known knowns suggests a certain amount of intent here. Brian Reape and Conor Diskin are the main dice throws and their progress will be well scrutinised. The Rossies were in no way cowed by Galway in the FBD final and will fancy being unfancied.

The Dubs go to Clones without Ciaran Kilkenny, James McCarthy and Brian Fenton among others so it’s as sticky a league opener as they’ve faced in quite a while. Monaghan are missing Niall Kearns and Kieran Hughes but if they’re of a mind to go for this they can inflict Dublin’s first opening day defeat since 2015.

Neither side has all their guns here. Tyrone go to Killarney without Mark Bradley, Colm Cavanagh and Padraig Hampsey but with a successful McKenna Cup campaign under them. Kerry are starting afresh but they won’t have David Clifford, Jason Foley, David Moran or any of the Dr Crokes players. Definite chance on the road for Tyrone.

Both sides will see this as a chance to face the other while some way below their best. Cavan are still getting settled in under Mickey Graham and head west without their main leader Gearóid McKiernan. Kevin Walsh is down a heap of players too but even so, you suspect their basement is higher than Cavan’s ceiling.

If ever there was a good time for Clare to catch Donegal, this is it. Declan Bonner’s side should win promotion but they’re starting off here without half their championship team. Clare have won the McGrath Cup and will delight in any hint of underestimation. Don’t be shocked if Colm Collin’s side make headlines.

Probably the match of the day in Division Two. The early season vibes around Armagh have been encouraging and they lost nothing in defeat in the McKenna Cup final. Kildare are missing the suspended Neil Flynn and Mick O’Grady as well as the Two Mile House contingent. Could be decisive.

Cork are no world-beaters but they can use this opener to find a little confidence for the road ahead. Fermanagh look light on attacking potency with Sean Quigley and Tomás Corrigan not expected back for the opening rounds. Ronan McCarthy has named four debutants, including Damien Gore and Eoghan McSweeney in the forward line. Time to step up.

Tipperary won this fixture last year but they go to Navan nobbled by injuries this time around. Robbie Kiely, Michael Quinlivan, Paudie Feehan and Bill Maher are all missing so the initiative ought to be with Andy McEntee’s side.

Quirk of the draw sees ante-post promotion favourites meet in Newry. John Sugrue keeps experience, notably Ross Munnelly and Colm Begley, in reserve on the Laois bench and a less than full-strength home team makes it a challenge for new manager Paddy Tally.

Carlow are well primed for this after a year of progress even though the loss of an injured Seán Murphy is a hindrance. They welcome a Sligo side, disrupted by injuries and under pressure to maintain their place in the division.

Two counties under pressure for different reasons. Louth haven’t won a league match for two years whereas Longford are short the Mullinalaghta players. An inviting opportunity for the home side even though Wayne Kierans hasn’t had a full pick either due to injury.

They drew on the opening day of last season but despite retirements, John Evans is able to welcome back former Sigerson winner Conor McGraynor. Benji Whelan takes over in Waterford and a close encounter is on the cards.

A challenging start to a season which is expected to yield a bounce-back promotion for Wexford. Paul McLoughlin has strengthened the attack since last year’s annus horribilis but Leitrim were impressive in pushing Mayo to penalties in the FBD.

London have proved competitive in the league whereas Limerick have struggled. The teams drew last year but London finished ahead in the table. This year though Billy Lee has a stronger panel.

Derry’s free fall hits rock bottom with a season in the basement. Imperative that they take the points here against Antrim’s walking wounded.