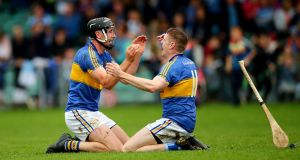 Patrickswell put an end to Na Piarsaigh’s bid for three Limerick senior hurling championship crowns in a row and their sixth title this decade, as they secured a record-breaking 20 county titles at the LIT Gaelic Grounds on Sunday afternoon.

Josh Considine scored a wonder goal in the first half before a second-half revival from the Caherdavin men. Considine’s goal gave his side a 1-9 to 0-6 half-time lead against the 2016 All-Ireland winners, who were without long-term injured Limerick star Shane Dowling.

When the two sides previously met in the early stages of the championship in April, Ciarán Carey’s charges emerged victorious in Kilmallock.

The Well were five-point winners in round two, a result that set the 2016 champions on the pathway to securing top spot in Group 1 of the Limerick Senior Hurling Championship. And both clubs previously met at this stage in 2015 when Na Piarsaigh edged out a classic final thanks to a narrow 1-22 to 4-12 win.

Patrickswell’s unexpected lead in the first half was cancelled out by a Na Piarsaigh fight back, but a late resurgence swung the pendulum back in favour of the Well who grabbed four points in a row after failing to score in 19 minutes after the break.

Both sides exchanged points in the early stages before efforts from Tom O’Brien and Considine edged Patrickswell ahead - 0-5 to 0-3 after the opening 13 minutes.

The crucial goal came in the 14th minute when Considine took full advantage of the referee’s decision to wave play on - after being fouled he returned to his feet to blast into the top corner.

Ronan Lynch pulled one back for Na Piarsaigh to narrow the deficit to six at the change of ends - 1-9 to 0-6.

After the break Na Piarsaigh upped the tempo and grabbed six points in a row with Will Henn, Peter Casey (3), Adrian Breen and Alan Dempsey all on target early on. By midway through the second half the teams were level.

Patrickswell then recorded their first point of the second half as Diarmuid Byrnes slotted over to stop to the rot, before four more scores in a row.

Late scores from Considine, Lynch and Gillane opened up a four-point lead heading into to the latter stages. Credit to Na Piarsaigh they didn’t give up and pulled points back through Peter Casey but Patrickswell had the final say to secure a five-point. Man of the match and Patrickswell captain Cian Lynch was the hero with two late points to seal the title win.