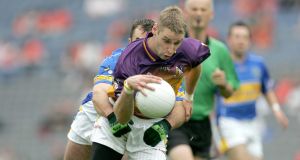 Matty Forde: “It wasn’t the most attractive option at the time, that’s being honest about it.” Photograph: Morgan Treacy/Inpho

It was the spring of 2003 and Seán Kelly was keen to get to work even before he’d gone on the payroll.

In the week leading up to the Congress at which he would be officially take the reins of the GAA presidency, he was ringing around the country in an attempt to dragoon people into joining a new committee. The Weaker Counties Task Force was to be headed by Eugene McGee and one of the players Kelly called to ask for his input was the Wexford footballer John Hegarty.

“It was well-intentioned but it was on the back foot from the word go,” says Hegarty. “There was a shadow over the committee from the very start, in that just by being there, you were accepting that you were a weak county.

“I felt I was bringing the view of how Wexford had been a couple of years previously. I was going to the meetings in the mindset of, ‘What can we do for the other weak counties?’ And plenty of the others who were there were going in with the same view.

“So when I was back with the lads and telling them about it, I wasn’t saying, ‘I’m in there fighting for us’. I was saying that it was aimed at other counties. And all of that was borne out by the fact that when we went into the Tommy Murphy Cup in 2005, we never took it seriously. We had been in the league final against Armagh and had run Dublin close in Leinster. So we didn’t feel this competition was for us. We were nearly above it.

“Looking back at it now, that was a mistake. But it kind of meant that the competition was doomed from the start. If the people involved in it felt they were above it, then it wasn’t going anywhere.”

No competition in GAA history has meant as well or been treated as badly. It ran for five seasons, from 2004 to 2008. When Kelly came in, he had three big ideas – changing Rule 42 on the opening of Croke Park, establishing junior and intermediate club All-Ireland competitions and organising lower tier inter-county championships in football and hurling. Two-and-a-half out of three probably isn’t a bad return.

“The problem with it was that it was more of a tournament than a championship,” says Kelly now. “You had to lose two games in the championship before you qualified for it. So maybe rather than going directly into the qualifiers after being beaten at provincial level, if we had directed teams into the Tommy Murphy Cup, maybe there would have been more of a take-up on it and it might have got more traction.

“When you lose two games in the championship, you’re inclined to say, ‘Right, that’s the season over for us’. And players want to go back to their clubs or they want to go travelling or whatever they want to do. But I maintain that those who did do it showed there was an appetite for it. it was competitive and there were good games in it and it pointed the way forward.”

The kernel of the idea had come from that McGee’s task force. Most of their time and energy centred around player welfare issues, expenses, training facilities and the like. But beyond all that, they spoke about the gulf in class between the top and bottom of the game too.

One of the anomalies that came up was the fact that the strongest teams in the country were together playing football for up to two months after the weakest teams had broken up for the year. How could the gap do anything but widen?

So by the time the 2004 Congress came around, Kelly had put together the bones of the Tommy Murphy Cup. It would be open to teams who had been knocked out in the first or second round of the qualifiers. The final would be played as a curtain raiser to an All-Ireland semi-final. The winners would get a trip to Boston out of it.

From the start, it was a better idea on paper than in real life. There was confusion over its start date, with most counties assuming it would come into being in 2005 but Kelly insisting it go ahead in 2004. By the time it came around, only five counties had signed up and one of those, London, had to pull out at the last minute because of a fixture snag.

Four counties was a pitiful take-up. Sligo’s manager at the time, James Kearins, had no interest in taking the team for it and left it to his selectors. Clare were the first winners but they only had to play two games to lift the trophy, so it was nobody’s idea of a triumph.

“When you have a competition that has only four teams in it, that’s not a good look for it,” says Mattie Forde, who was top scorer in the competition as Wexford got to the final the following year.

“It had the feel of a competition that was thrown together. A bit of lip-service for the weaker counties.

“Only we were playing matches at home, I’m not even sure they would have taken place. Trying to get lads to go out and play at the time would have been hard if we had been going up the country to Longford and Fermanagh to play the matches. We basically got to the final because our matches were at home so we had nearly our full team.

“When you’re out of the championship and you’re out of the qualifiers, in a county like Wexford 99 per cent of lads are dual players. So you have not one but two club championships to go back for. The clubs haven’t seen you all year, they want you back and you want to go back. It wasn’t the most attractive option at the time, that’s being honest about it.”

It had its days. Wexford lost that 2005 final, giving Tipperary their biggest day and earning Declan Browne a medal to adorn a brilliant career. Wicklow won it, Antrim won it, Leitrim made a final. But it was always tolerated without ever really flourishing into something that teams set out to have a real go at. And once Kelly’s presidency ended in 2006, it was on borrowed time.

“When I left, there was no appetite for it in Croke Park,” Kelly says.

“They were glad to encourage the idea that it had run its course and just consign it to the bin. What should have happened was it should have been looked at to see how it could have been improved and come up with something that would have long since matured into a proper championship by now. But the appetite for it wasn’t there and it fell by the wayside.”

Over a decade on, the current GAA president John Horan brings his proposals for a second tier championship to special congress in a fortnight’s time. There are tweaks to the format here and there but none that hide the fact that it’s essentially a reheat of the Tommy Murphy Cup. Kelly still maintains it’s a workable idea and will be supporting it all the way but even he concedes that it’s lacking momentum as decision day approaches.

“I get that impression, yeah,” Kelly says.

“A lot will have to do with what promotion is going to go with it. A second-tier competition needs to be promoted properly, first and foremost. Playing the final in Croke Park and having it on live television is vital. The objection that players have, which is understandable, is that it will be treated as an afterthought, a second-class competition. If that’s the case, it isn’t worth doing.”

The job for the GAA in the next fortnight boils down to convincing counties that this is more than the Tommy Murphy Cup given a fresh set of clothes. If they can’t do that, it’s difficult to see how they get it through.

If it didn’t work then, after all, why would it work now?

Owen Doyle: Ireland were fortunate to keep a full complement on the pitch