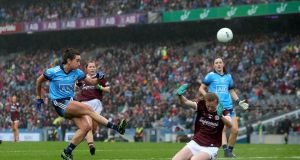 Niamh McEvoy in action for Dublin in the All-Ireland final against Galway. She has now signed for Australian Football League team Melbourne. Photograph Bryan Kean/Inpho 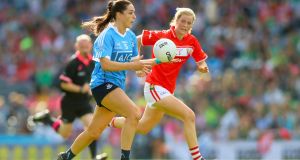 Sinead Goldrick: Dublin star is heading Down Under to play for Melbourne. Photograph: Tommy Dickson/Inpho

The best laid plans, and all that. Hardly had the piece on the failure thus far of Australian Rules to attract any of the stars of the all-conquering Dublin team been completed when up popped the video on Melbourne FC’s website on Wednesday morning . . . announcing the signing of Sinead Goldrick and Niamh McEvoy.

The pair, fresh from helping Dublin complete an All Ireland three-in-a-row last month, are, then, the latest in an ever-lengthening list of Irish players to accept the offer of professional Australian Football League (AFLW) contracts.

Back in 2017, it was a straightforward enough task to list the number of Irish who featured in the inaugural AFLW season. There was, after all, only one. Melbourne: Laura Corrigan Duryea.

The trickle, though, is turning in to a torrent. This is the list, so far, for the 2020 season.

So, Goldrick and McEvoy bring to 18 the number of Irish players – mainly intercounty footballers, but dual stars too, like O’Dwyer – who will feature in the new campaign, a number that could yet rise with several more still hoping to earn contracts.

The AFLW confirmed on Monday the inclusion of Saoirse Noonan (Cork), Vikki Wall (Meath) and Olivia Divilly (Galway) in the list of 48 players invited to take part in this week’s ‘Combine’ in Melbourne. The Combine is made up of a series of physical and medical tests, as well as interviews with club representatives, with the purpose of helping clubs decide on whether to select the players in October 22’s draft.

By making that group of 48, the Irish trio already know that they have attracted AFLW interest, their invitations to the Combine based on clubs including them in shortlists of players they wished to see at the trials.

Meanwhile, Jason Hill, co-founder of CrossCoders, has provided a list of 13 more Irish players who, he says, “have come through our pathway” and will also be up for selection in the draft.

CrossCoders is the programme that offers international players from other sports the chance to win contracts with AFLW clubs and back in May it held its first international camp in Athlone where sportswomen from various codes – chiefly football, but also from rugby and camogie – were invited to take part in trials.

In Goldrick and McEvoy’s case, they were approached directly by Melbourne back in May and after first speaking with Dublin manager Mick Bohan, who gave them the go-ahead to accept their offers, they signed up for the 2020 season.

Melbourne, judging by the club’s trumpeting of the signings, which gained national media attention, and that video which was a show reel of some the duo’s finest moments with Dublin, were well chuffed with their “coup”, as they described it.

“This is a significant announcement not only for our women’s programme, but for our football club in its entirety,” Todd Patterson, who looks after Melbourne’s recruitment, told the club’s website.

“Over the past six to eight years, Sinead and Niamh have become two of the best-credentialed female athletes in Ireland. They are terrific people, and with Dublin GAA being the closest thing you can get to a professional sporting organisation in Ireland, we have full confidence they will be well prepared for the demands of AFLW.”

“To be able to have our first AFLW international players come from Dublin is really special, as it extends that bond and continues Jim’s legacy,” said Patterson in reference to the late Jim Stynes, the former Dublin footballer who had a hugely successful career with Melbourne after joining them in 1987.

“Dublin holds a special place in our heart, given the connection to Jimmy and the Stynes family,” he said. “We’re looking forward to building on this association with Dublin, to share ideas and player development strategies. We see this as a real opportunity to continue to explore the best practices for our program.”

Dubs fans might hope that Melbourne’s “player development strategies” don’t extend to them helping themselves to any more of their players, a nervousness that will, no doubt, be shared by every other county that has seen their best head for Australia.

While the fixtures for the 2020 AFLW season have yet to released, it will be a longer campaign than the previous three, the number of teams having been extended from 10 to 14.

It’s unlikely, though, to last much more than its usual two months (February and March), which means that while Irish players will be unavailable for a chunk of their counties’ National League campaigns, they’ll be free to play in next year’s championship.

That is, of course, if they are willing or able to return home for intercounty duty. After her debut season with Collingwood, Sarah Rowe, for example, was back in action with Mayo this year towards the tail-end of their league season and for all of their championship campaign. But Donegal’s Yvonne Bonner remained in Australia for work reasons, the county therefore weakened by the loss of such a key player.

On the upside, there’s the opportunity for these women to play sport professionally, with all the attendant benefits, not least in the fitness and conditioning departments, which can only be a perk for their counties if they return.

They won’t make their fortune in Australia, mind, the AFLW salaries ranging from €15,000 to €8,000 last season, but they get the chance to do what most, if not all, of them might never have dreamt was possible, to become full-time sportswomen.

To go from one Irish player to (at least) 18 since 2017 is a fair old surge, much of the AFLW’s headhunting of Gaelic football’s talent down to the impact made by Cora Staunton, currently preparing for her third season with Sydney after recovering from May’s triple leg break, and the likes of Ailish Considine who became the first Irish woman to win the title when she helped the Adelaide Crows beat Carlton in last April’s Grand Final in front of a record crowd of 53,034.

Having played in front of 56,114 spectators last month, Goldrick and McEvoy will hardly be daunted. But that trickle turning in to a torrent might just leave women’s Gaelic football feeling just a little bit twitchy.