Kieran Kingston back at helm as Cork unveil raft of appointments 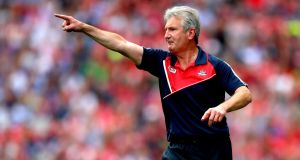 Kieran Kingston previously stepped down after two seasons in 2017 due to work commitments. Photograph: James Crombie/Inpho 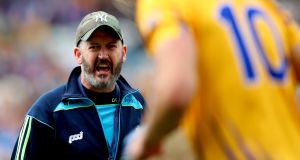 For a county prone to the occasional breakdown in appointments, the Cork County Board have made a strong statement of intent with three new hurling managers appointed over a range of terms.

After an extensive consultation over several weeks, the management teams were put before last night’s county board meeting for ratification, beginning with the appointment of Kieran Kingston as senior manager for the next three years.

Kingston previously stepped down after two seasons in 2017 due to work commitments, and comes back to replace John Meyler, bringing with him Ger Cunningham as coach and also former All-Ireland-winning defender Diarmuid O’Sullivan, who returns as a selector with Kingston.

Pat Ryan from the Sarsfields club will take over the under-20 position for a two-year term, joined by Donal O’Mahony (Bishopstown), Brendan Coleman (Youghal), Fergal Condon (Aghada) and Wayne Sherlock (Blackrock).

And also coming into the picture is former All-Ireland-winning goalkeeper Donal Óg Cusack (Cloyne), who will take on the minor (under-17) on a one-year basis for 2020, joined by his former teams mates Seán Óg Ó hAilpín (Na Piarsaigh), Tom Kenny (Grenagh).

Former senior manager Jimmy Barry-Murphy was briefly linked with that role, which Cusack now takes – his first major position in Cork: he was part of Davy Fitzgerald’s Clare coaching ticket in 2016, and was also central to the Cork player strikes of 2002 and 2007-08, including a stand-off with then manager Justin McCarthy.

‘Rush into any decisions’

“I am absolutely delighted with the outcome of the appointments process, and honoured to be putting these names before the county board”, said county chairperson Tracey Kennedy.

“As I indicated at the outset, we did not want to rush into any decisions, and the length of the process is indicative both of the extent of our consultation and the number of excellent people who were willing to talk to us about Cork hurling, and I truly believe that we now have a structure in place which will ensure that we can always secure the best people to lead Cork teams, on a clear pathway for both coaches and players, from underage all the way through to senior.”

Elsewhere, Kerry’s four-time All-Ireland winner Killian Young has announced his retirement from inter-county football, the 32-year-old defender was the last link with the All-Ireland-winning teams of 2006 and 2007.

“After 14 years of representing my county at senior level, the time has come for me to move onto the next chapter. To say it was an honour to play with Kerry is an understatement, I’ve loved every single minute of it and if I could roll back the years and do it all again, I would in a heartbeat.”

TG4 have also announced their pick of GAA club action for the next two weeks: this coming Sunday, the cameras will be in Limerick for the county hurling final that sees the All-Ireland champions of 2016, Na Piarsaigh, try and win a third county title in a row. Standing in their way are 2016 county champions Patrickswell.