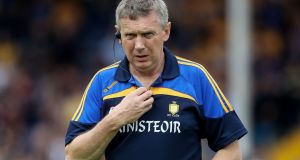 Donal Maloney will not be managing the Clare hurlers in 2020. Photograph: Tommy Dickson/Inpho

The Clare hurlers will have a new manager at the helm in 2020, after Donal Moloney confirmed his decision not to seek another term.

Moloney and Gerry O’Connor were joint-managers of the team from late 2016 to the end of the current season.

O’Connor stepped away following Clare’s championship exit at the All-Ireland quarter-final stage against Tipperary. Moloney had declared his interest in the vacant position to the Clare county board during the summer and he has since met with board officials on two separate occasions to review the 2019 season and to outline his plan and management team for the coming season.

But in a statement released on Sunday afternoon he said: “due to the ongoing uncertainty over the process of selecting new management and despite the support I have received from the hurling squad, I do not wish to inhibit members of the existing management team and persons who had committed to coming on board for 2020 from missing out on opportunities as other counties put together their coaching teams. As a management team therefore, we have taken the decision to not seek another term.

“On behalf of the management team, I would like to thank the players for creating such a fantastic environment over many years and for the honesty of effort and commitment they have shown to their families, friends, their clubs and to their county. They have brought great honour to the Clare jersey in the 12 years I have been involved in intercounty management since 2007 from Under-16 level up to the senior team. I wish the group the very best for the future.

“I want to thank Club Clare Hurling Supporters for its invaluable support during the past three years. I also wish the incoming management team the very best for 2020.”

Louis Mulqueen, who was part of Davy Fitzgerald’s backroom team in 2013, and former Hurler of the Year, Brian Lohan are both still vying for the role. They are currently involved in an interview process, with an update expected from the county board after they meet on Tuesday.

During their three seasons in charge Moloney and O’Connor brought Clare to two Munster finals in 2017 and 2018 and an All Ireland semi-final in 2018. The pair previously managed Clare to an All-Ireland minor final in 2010, guided Clare to three All Ireland Under-21 titles in 2012, 2013 and 2014, and oversaw Clare’s All-Ireland Intermediate win in 2015.

1 Questions raised over Ireland v Italy fixture due to coronavirus
2 Six Nations: No place to hide for Ireland’s misfiring captain
3 Panorama show Mo Farah changed account to anti-doping investigators
4 All in the Game: how Firmino’s agent made him faster . . . on his laptop
5 Eddie Jones’s comments have already provided Irish team-talk for 2021
Real news has value SUBSCRIBE