GAA players and teams beginning to realise speed is a skill 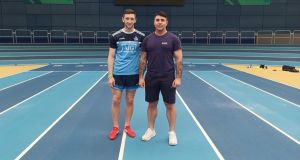 Martin Bennett and Ciaran Archer during an individual speed session.

Speed is quickly becoming the most important facet of the modern game in both Gaelic football and hurling.

Speed of skill conversion and, of course, speed of movement. The average intercounty player will run 20 metres from a standing start in 3.09 seconds. That’s according to Athlone Institute of Technology’s department of sport and health sciences. Most club and county teams across the country are now measuring this initial burst of speed, but it’s largely being left up to the players themselves to improve upon it.

In order to keep their report cards clean, and to be moving as quickly and efficiently as possible come game time, a number of them are calling on the help of an expert.

The first GAA player Martin Bennett worked with was in 2006; he turned Clare’s Tony Griffin from “a slogger and endurance runner” into a “direct power runner who went at the goals every time he got the ball”. Griffin went on to win his first All Star that season. He’d met Griffin at a sports course, and a friendship was the first step on their journey. Eight years later and Tipperary workhorse Patrick “Bonner” Maher sourced the help of his army colleague Bennett. They followed the same template and Maher went on to win his first All Star at the end of that 2014 campaign.

“I kept them out of the set-up until March, put a few extra kilograms on and then put that extra power and strength into good running mechanics and it really changed their game,” explains the understated Offaly native. He’s since gone on to train several top club teams across the country, the Offaly hurlers, and he’s currently working with the likes of Down footballer Caolan Mooney, Tyrone’s Conor Meyler, Cork dual player Aidan Walsh, and hurlers Damien Cahalane, Shane Kingston and Seán O’Donoghue.

“What I’ve found is modern players know they can get faster, but it’s not being catered for. They’re starting to realise that there’s more to it than getting from cone A to B 10 times and you’ll be faster. It’s way more in-depth than that, it’s not 60-second abs. There’s learning in it, there’s processing. There’s skill, there’s creating habits. It has to become a habit, or we’re not getting faster. We’re just stumbling between the cones with more force. And how much force can we use before we actually destroy something injury-wise?

“Every single run should be ran to get better – it’s a skill and we need to practise the skill of it. The same as you would a shooting drill. You wouldn’t just kick 100 balls without trying to get them over the bar.”

The star of this year’s Under-20 football championship was Dublin’s Ciarán Archer. The 18-year-old scored 10-35 in five matches as Dublin reached the final, and he established himself as the capital’s next big thing. But after his team’s surprise defeat to Cork, there was only one thing on his mind. Improving his speed.

“Days after an All-Ireland final I was in my home club gym and was asking myself what more could I have done and where do I need to improve,” the youngster explains. “I began looking around and I came across Martin’s page on Instagram and after reading his detailed and blatantly obvious knowledge for sprinting and mechanics, I decided to send him a text.

Down footballer and former AFL player Caolan Mooney. It was great to get a message from this guy looking to work on his mechanics for both speed and efficiency. It was also a good opportunity for me to see what a professional trains like and his overall approach. As always I ask the athlete to be warm when I get there with their match day warm up, and I timed him over 60 metres which I find a good distance to gauge both speed and fatigue/efficiency for footballers. Then we will analyse and try find a common ground between my ideas and his uniqueness. Human first.... Technique second. This guy is a thorough bred athlete, and he is full of energy with a glint in his eyes. He lights up with a challenge. He meant business. He had two drinks, one with Caffeine and sodium and the other with electrolytes. He had a notepad and pen which he kept returning to. But most of all he had hunger, and drive, and he met everything with huge energy and enthusiasm. There was no "I'll hold back cos I've training on Monday" or "I'm just recovering from serious running injuries" (which he is) This was just "show me the wall and I'll go through it" stuff. He's fast!!!! Like reeeally fast!!! 7.65 on his own 😮 I've seen athletes in provincials pretty pleased with that. When we practiced a bit and went back at it he hit 7.3 till we went home 🏃💨 Out and out gent @caolanmooney_ #gaa #football #gaelic #allireland #crokepark #down #AFL #afl #hurling

“We started with Martin watching my current technique and he recorded the times. He noticed I was wasting a lot of my power slapping my feet into the ground and we ran a few basic but highly intensive drills. We then cleaned up my mechanics and started trying to get the form correct. We then timed it again and it instantly dropped.”

Bennett explains that the St Maurs club man told him when they first met that he struggled with pace and that he’d been told speed was going to be an issue for him moving forward with Dublin.

In his first session Archer lowered his top speed over 20 metres by half a second. “After the session he was nearly relieved. I said, what was your take-home from that today? And he said: ‘That I’m not actually slow – that I’m not naturally slow and I’m not going to struggle with pace. I just need to learn how to run properly.’

An army corporal who has also trained a boxer to compete for a national title, competed and won titles (all-army and a Connacht title) as a self-taught sprinter, and played hurling at every grade for his club - Bennett trains army cadets and recruits in his day job as an instructor with the Defence Forces. Coaching is his passion.

“I usually get the technique right, running well over 60 metres before we start with the shorter distances. Otherwise you’re just forcing mechanics. Over 60 metres Kingston ran a 6.66. That’s not comparable to athletics because of reaction time and block skills, but it is rapid fast. He ran a 6.87 first but dropped that by the end of the session.

“Hurlers are generally faster than footballers. But even a guy like that, people would think he wouldn’t improve within a session. But there’s scope there even for the faster players, and there’s so much scope for the slower players.

“I mean, the shape and that condition of these GAA players. I don’t think they should be slow – the muscle is there in all of them, the athleticism is there, the leanness is there and I think it’s all just trapped by bad mechanics.”

Last year Bennett got involved with the Coolderry club in Offaly, and with an ageing team they won the league and championship in Offaly. Beaten only once in the season, in the Leinster semi-final after two periods of extra time against Dublin champions Ballyboden St Enda’s.

“All my running in Coolderry was sprint based, even the conditioning running I was really adherent and really pushing proper mechanics because I wanted to mind those legs. And I wanted them getting quicker. They were the oldest team in the county, they had eight guys over the age of 30 and six of them were over the age of 35. But the likes of Brian Carroll (former Offaly hurler) ended the season saying he felt better than when he was 23. We had only one soft tissue injury all year from my training.

“Any running I did we focused on mechanics rather than fatiguing through running. I just worked on speed and good mechanics in their running and I did it early in their session. Then they did their hurling and then I would really stretch them physically with boxing. Where I would hit their lungs and really hit their endurance stamina but their legs were still fresh every time they went out on the field, to do more speed.”

Bennett brought my own 20-metre time below the intercounty average within three sessions. And my 60-metre time down by nearly two seconds with specific feedback – including pictures and slow-motion video breakdowns – and improved mechanics. With his infectious positivity, it’s little wonder he’s been in talks with a number of top intercounty teams, one of which he’s very close to agreeing to join, for the 2020 season.

“I’ve done my athletics coaching course, but I’m not just reading off a textbook. I definitely think my obsession with the mechanics of running and also my belief in the human is what gets me results. I’m then dealing with people who’ve been told ‘you’re not fast’. I’m saying, you don’t know that.”