Nicky English: Field has bunched as rivals close in on Limerick 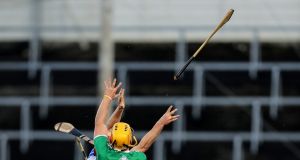 A significant weekend for the hurling championship: we go into the last six with the pecking order not nearly as clear as it was going into Saturday. Limerick have been duly crowned Munster champions – but not with the authority that was expected or showing the conviction of their previous two wins.

Credit Waterford certainly for a tremendous effort; they went at it and got top-class performances from Stephen Bennett whose scoring kept them going and Tadhg de Búrca who was outstanding at centre back.

For a lot of the match they were hanging in there but at times there was also a sense of danger for Limerick. A smooth first half left them maybe a bit complacent but for me they were hitting the panic button after the third quarter and the water break appeared to steady them.

You could see John Kiely talking to them intensely rather than using the whiteboard and they got back on track but still Waterford came at them. Their bench also helped; I thought Séamus Flanagan was excellent when he came into the match but in the end it wasn’t the emphatic confirmation of their credentials that I thought we might see.

The pecking order was rattled earlier in the weekend as well.

On Saturday night, I wanted to see would Galway confirm their Wexford form from the Leinster semi-final and the strange thing was that in some ways they did. Daithí Burke was back and did well for the most part. When they went five ahead, I was convinced they’d put it to bed and with Kilkenny taking off Colin Fennelly and Walter Walsh it looked to be going only one way.

Maybe it would have but a bit of magic from Richie Hogan and a brilliant finish by TJ Reid – the old firm still in business – in the space of a few seconds shifted the momentum in the match even though Galway rallied well to lead by two. There’s no worse team to have against you when that happens.

Brian Cody mightn’t have the depth of talent he had 10 years ago but he was able to bring in young players and make the best of them. It really has become a dynasty over the last 20 years. The quality of the hurlers may vary but the consistency of performance is remarkable – they always play at least to the sum of their abilities.

This was very significant for them, as they’re now sitting pretty in an All-Ireland semi-final with considerable disruptive capability and a lot of sorting out to take place next week in the quarter-finals.

Where it leaves Galway, I’m not sure. They’ll be terribly disappointed but they had the winning of this and it brought home yet again the problem they have had with scoring goals despite being comfortably on top.

I think they are still very much in the reckoning and might even benefit from the jolt they got on Saturday evening but we were looking for confirmation that they were clearly the top challengers to Limerick. They now have a longer journey, possibly outside of Croke Park, and even more convincing to do.

In Limerick earlier on Saturday, we saw the value of goals when Tipperary scored two that were perfectly timed and critical to the outcome. It was typical Tipp in a first qualifier outing that the match fluctuated around them and looked to have run in Cork’s direction but it was important for Liam Sheedy’s team that the best phase was the last one.

That’s what they will take into the next week. The physical strength of Michael Breen and Dan McCormack also had an impact.

I think we saw some confirmation that playing three weeks in a row took a toll on Cork and they didn’t have many bench options –- unlike Tipp, who got momentum and improvement from Willie Connors and Paul Flynn.

The wind was an issue and Tipp lost all shape and looked all over the shop for the first goal, having pushed up so far that Patrick Horgan had a clear run for goal when Cork won a midfield ruck.

It can work better for teams playing against a wind like that, especially in the full-forward line. Instead of too much ball flying over your heads, a reduced supply holds up a bit and this was a factor in Séamus Callanan’s better display in the second half.

Jake Morris is a very promising player and took his goal really well. There’s a touch of the Larry Corbetts about him in his instinct for goal and he was probably Tipp’s best player against Limerick.

Liam Sheedy will be pleased with how the All-Ireland champions have rehabilitated on the road so far and this morning’s quarter-final draw will tell us a lot more about what lies ahead.

It looks, however, that the field has bunched and even if Limerick are still in front, the distance has shortened.

Wexford’s fate on Saturday afternoon didn’t surprise me. I felt their scoring limitations last year when unable to put away a 14-man Tipperary team in the All-Ireland semi-final was a bad indicator. Without Lee Chin scoring it further reduced their chances simply because of the difficulty Wexford have in keeping the scoreboard ticking over.

Clare’s form wasn’t brilliant but Tony Kelly is in Hurler of the Year territory and was scoring from everywhere. I was surprised that he wasn’t man-marked but maybe, this year, he’s unmarkable.