Lilywhites leading at half-time, but 15-point swing on the scoreboard changes everything 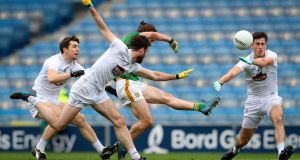 Jack O’Connor isn’t used to these sorts of Championship humiliations and, truth be told, it’s been a while since Meath dished out this sort of punishment in a big game at Croke Park too.

Leading by six points at half-time, and having rendered Meath virtually impotent in all areas of the pitch, the O’Connor project in Kildare looked to be in rude health.

Yet 35 or so minutes later, and following a 15-point swing on the scoreboard, the picture looked entirely different, with Meath through to another Leinster final and Kildare out of the Championship.

After two games, the stats are mightily encouraging for Meath: a dozen goals now scored, none conceded, six Championship debutants introduced and 4-4 returned from substitutes.

All of those numbers paint the picture of an action-packed, goal-hungry team and, while the first-half performance fell well short of that description, what followed was more than enough to command Dublin’s attention ahead of next Saturday’s provincial final.

Three of their rookies – Mathew Costello, Jordan Morris and Jason Scully – slammed second-half goals, while Cillian O’Sullivan helped himself to a major too, as did Joey Wallace, who proved an excellent impact sub for the second weekend running.

There is a caveat attached to all the optimism: Meath still haven’t beaten a Division 1 team in either League or Championship fare since 2014 and that’s the next level their ambitious manager, Andy McEntee, aspires to.

So has he seen enough to suggest that Meath can possibly trouble the Dubs?

“I think that’s for other people to decide, to be perfectly honest,” said McEntee. “Ask me after the game next weekend and I’ll tell you. I’m not being smart, it’s hard to know. Look, nobody has managed to beat them in six years so that’s everybody’s aim, but nobody has achieved it.”

We won’t suggest it’s a good omen that the last county to beat Dublin in Leinster was Meath in 2010 – there have been too many maulings in between, particularly last year’s Leinster final, for that to matter.

Something more tangible for Meath supporters to cling onto is the fact that they have genuine quality now in attack, something they’ve been lacking.

Shane Walsh hasn’t been shooting the lights out like Morris, who now has 4-5 from two Championship outings, but he’s a clever, two-footed player with talent to burn. Throw in O’Sullivan and that’s three serious forward options that Dublin will have to carefully account for.

Kildare did it for the first half and deservedly led 0-10 to 0-4 at the break, with Jimmy Hyland, their 2018 All-Ireland U-20 winning hero, excellent and taking Seamus Lavin for four points.

Kevin Flynn, newcomer Darragh Kirwan and ex-Aussie Rules man Paddy Brophy were among the scorers too, as three-time All-Ireland winning Kerry manager O’Connor cut a satisfied figure on the sideline.

From there things went downhill, slowly at first and then at a rapid rate as Meath outscored them by 5-5 to 0-5 in the second-half. O’Sullivan and Morris played in Costello for a goal two minutes after the restart that cut the deficit in half.

Within 90 seconds Morris had strode in from the right and planted goal number two for Meath. And so it went on, with O’Sullivan, then Wallace and finally Scully all getting in on the act.

It summed up Meath’s new-found sense of urgency that the O’Sullivan and Wallace goals came from turnovers, while McEntee’s subs, particularly the speedy Wallace, exploited the space left by a Kildare team committing more to attack as they chased the game. Kildare’s ignominy was summed up by a stoppage time straight red card for Shea Ryan following a high tackle on O’Sullivan.

“While Meath didn’t have a great campaign in Division 1, they were playing at a level that’s a bit above where we were playing and I thought that told at times in the second-half,” said O’Connor.