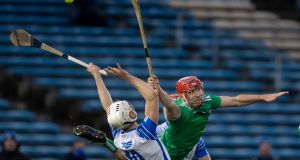 It wasn’t quite what we had been expecting but Limerick eventually put their foot down and sealed back-to-back Munster hurling titles for the first time in 39 years. They were pursued all of the way home by a battling Waterford side that took the fight to their opponents all around the pitch and prevented them hitting the easy rhythms of their familiar power game in the middle third.

Waterford were inspired by 0-12 from Stephen Bennett, including some frees so long-range they needed visas and a dramatic point to draw the match level in the 49th minute before then pushing them ahead.

In particular, the challengers put in a feisty third quarter just as the consensus expectation had developed that, having led by three playing into the wind in the first half, Limerick would be throttling away over the horizon by the second water break.

Instead, the match was evenly poised and the champions rattled.

It’s hard to labour under the constant assumption that you’re going to steam-roll your opponents and Limerick did well in the end to see off the stern challenge.

Their big performers came to life for different periods of the game but when the decision was on the line Ger Hegarty stepped up, as did former centre forward Kyle Hayes – now permanently stationed at left wing back where he earned the plaudits of his manager John Kiely:

“He’s got great focus, great concentration and he’s very athletic and strong. So going forward from him on the halfback line is a real plus for us now with the speed he can attack and set up attacks at the other end.”

And when the shooting became very jittery - just one first-half wide was followed by eight more after the break - Graeme Mulcahy focused his sights all the more tightly. At the back they had uncommon difficulty getting rid of ball and were turned over for the lead point at 0-17 to 0-18.

As ever, Limerick’s bench added to the collective push. Séamus Flanagan came on and scored with his first touch, something Adrian Breen emulated. They were, by the end, just too far beyond Waterford’s grasp.

But they had been pushed hard. Tadhg de Búrca maintained the stellar standards of his season with a masterclass in reading the attacks and cleaning up. He had allies. Team captain Conor Prunty had a great tussle with Aaron Gillane and, if the Patrickswell marksman ended the day with three from play, his marker had his own victories.

In the first half, Limerick were moving smoothly enough and led more or less all the way. Even if they weren’t able to sweep through the centre of Waterford’s defences, they were sharp in possession – Cian Lynch very lively – and picked out their full-forwards with enough good-quality ball to get them all on the scoreboard from play within four minutes.

They also thrived under the opposition puck-out, thieving half of them and looked well set going in at half-time, 0-14 to 0-11 ahead.

But they were rocked back by the energy of the underdog response. Bennett from two frees and Jack Prendergast, who had a magnificent second half, ticked off the deficit within five minutes of the restart.

Limerick eventually regained control but it was no procession. Seán Finn was quietly excellent at the back and in the 69th minute calmly got a stick in to block a pass that could have spelled a goal when there was only four in it.

Waterford manager Liam Cahill ended with concerns about corner back Shane McNulty, who went off injured in the dying minutes. Otherwise there were positives.

“There are a lot of positives. We went hip to hip with one of the best teams - what most of the country believes is the favourites for the All-Ireland - so once you’re doing that you’re good and competitive and you’re at the top table and the challenge for us now is to recover and refocus and give ourselves the chance of getting to the last four of the championship.”

Kiely used the post-match media conference to sound off on the subject of public restrictions on numbers attending matches, which mean that he has to leave a large group of his panel at home on match days.

“I’ve no problem having difficult conversations but I don’t agree with the premise that we can have 200-plus people in the stadium, which were here today watching this match when my 10 players are at home this morning, training number one in order to keep their load up to the equivalent level to ensure that if they do get called up next week they don’t get injured because their load isn’t right.

“I don’t agree with it; I’ve a strong objection to it. I have made representations, I have been heard but the situation still stands.”

Women’s Rugby World Cup to be expanded to 16 teams from 2025 12:03
Joe Canning discharged from hospital on Sunday night 11:45
Defence dominated Nations Cup has failed to lift spirits 11:09
The Offload: Shane Horgan pulls no punches as the podcast wars rage on 10:00
All in the Game: Tottenham’s Dele Alli proves popular in Vermont 10:00
Crossword Get access to over 6,000 interactive crosswords