Cork, Kilkenny and Galway can also book their places in respective provincial deciders 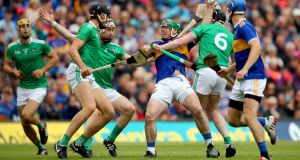 Limerick’s Gearóid Hegarty, Cian Lynch and Declan Hannon tackle John O’Dwyer of Tipperary in last year’s Munster final. Tipperary will have to do a lot better in the middle third if they are to prevail on Sunday. Photograph: James Crombie/Inpho

We’ll know all about winter hurling by the end of this weekend with the Met Office advisories predicting rain and high winds. It will certainly interfere with our ability to judge whether last week’s high scoring was a trend or simply a reflection of a couple of one-sided matches.

It’s going to be a winter surface in Thurles and Páirc Uí Chaoimh and even if Croke Park won’t be as severely impacted by the bad weather, no pitch is going to be unaffected but all teams are skilful and able to move the ball well.

It’s a bit of a barrage to have all four provincial semi-finals on the same weekend but we’ll have a very good idea of where the championship stands by Sunday evening.

I think it’s also worth mentioning that there are four counties with new managers, which in the current circumstances can be a disadvantage. Last week Clare were just bedding in with Brian Lohan whereas Limerick have had Paul Kinnerk and John Kiely for four years and knew exactly how they’d be playing.

This weekend there are another three new appointments, two of them facing up to each other. Liam Cahill had an encouraging start to the year in the league but I can’t see Waterford under his management playing a sweeper so it’s a change of tack.

Although Kieran Kingston is theoretically in the same situation, he managed most of these players as recently as two years ago so there won’t be the same readjustment.

There will however for Shane O’Neill in Galway and it’s definitely an issue for him taking on a team as drilled and practised as Davy Fitzgerald’s Wexford.

Most attention this weekend will be on Cork this Sunday when Tipperary play Limerick. There’s a lot of context here. Would Tipp have won the All-Ireland if Kilkenny hadn’t done them the favour of taking out Limerick? Limerick certainly don’t believe that.

When the counties met last year in the Munster final, Tipperary were very short on answers. They have the inside forwards to do a lot more damage than Clare looked likely to do a week ago when Limerick looked vulnerable in the full-back line and conceded a goal as a result.

But having had a light shone on the problem and a week to do something about it, they surely will. Dan Morrissey and Barry Nash are good players and I’d be surprised if there’s not an improvement.

The real war will be waged in the middle third. Will the Tipperary half backs deal any better with the power of Hegarty, Hayes and Morrissey?

In last year’s provincial final Limerick were completely dominant in that area. They ran out 12-point winners but that was actually good value for Tipp whose supporters emptied the ground five minutes before the match was over – the first time I remember that.

That short, running game left Tipperary looking vulnerable and it happened again in the All-Ireland semi-final for a lot of the match until Wexford ran out of steam and started to lump ball down the middle – which Kilkenny also did in the final when reduced to 14 – and was like manna for big defenders, comfortable under the high ball.

If Limerick were to do that, there’d be only one winner but they don’t play like that and Tipp need to show a far greater level of adaptability than they managed 16 months ago and, in general, they haven’t come out on the right side of these contests in recent times.

Both teams can survive defeat here but this game is a really important litmus test. I think having last week under their belt is a huge asset for Limerick. They visibly improved in the second half. The word I get from most counties is that they’re flying it in training but how reliable is that? Limerick are up and running and had things to work on this week whereas Tipp don’t yet know their baseline.

For me that’s decisive.

It all gets under way this Saturday afternoon in Thurles. I started off with the view that Waterford could spring a surprise here but am not so sure now that it’s time to play the semi-final.

Injuries are having an impact. Pauric Mahony’s knee injury constitutes a massive loss for Waterford but Darragh Fitzgibbon is also a major withdrawal for Cork.

My issue with Waterford is that there isn’t much change up front so it will be particularly interesting to see how Dessie Hutchinson progresses at county level. He was very impressive in the county championship.

Cork though look to be ‘at it’ to a greater degree with Kieran Kingston back as manager. Their much-criticised work rate will improve and they have the forwards – Patrick Horgan has been in form and Shane Kingston looked to have really matured in the Fitzgibbon – to put this away.

Dublin, like Limerick, have the advantage of having experienced a game against Laois who, if they never looked like winning it, stayed afloat for a good hour.

Mattie Kenny has had a week to sharpen things up – three goal chances against a team that was conceding a lot of possession spoke for itself – and with Conor Burke and Donal Burke playing so well, the materials are there to kick on.

They’re not going to be a pushover and have a strong bench but I’m not convinced they can keep out TJ Reid, Colin Fennelly and the supporting cast.

In this evening’s second Leinster semi-final I have a sneaky feeling for Galway. They’ve been there or thereabouts for five years, including winning the 2017 All-Ireland. I think that getting out of the round robin and into Croke Park will suit them more than anyone.

They have a couple of new players, like Evan Niland and Fintan Burke, and impressed me in the league. Wexford are predictable but that doesn’t help teams to cope with them. I expect they’ll be very fit, with the Diarmuid O’Keeffe’s and Simon Donohoe’s bombing up the pitch but their scoring threat would still concern me.

Galway are embarking on a championship under new management but they have the physical strength and forward threat to get this done.