Beaten finalists will embark on All-Ireland campaign without Joe Canning 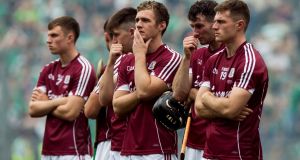 On a fresh day in February, Dublin came to Salthill for the stiffest test of their league campaign. What unfolded didn’t surprise Mattie Kenny.

“That is the standard we have to get to,” he said in the corridors within Pearse Stadium after watching Galway post 1-20 and cruise past Dublin, who were stuck on 1-11 at the end. It was formidable fare from Galway who have thrived in the unfashionable neighbourhood of Division 1B: just four wides over the afternoon, an eye-catching show from Cathal Mannion at midfield and a powerful, bustling forward performance from Seán Bleahene.

“Galway are All-Ireland champions from last year and they are the best side in Ireland,” Kenny continued, before checking himself as if remembering what had happened in September. “If not, then one of the top two sides.”

Dublin absorbed the lessons fast and put together an impressive league, topping the division. Galway was their sole defeat. They are such popular dark horses for a big championship say that they are not really dark horses at all. But the forecasts for Galway’s summer would puzzle even the most astute meteorologists. Kenny’s assessment remains correct: they are among the top two sides in Ireland. In flow, they look unbeatable. But will they achieve that flow?

In February, Johnny Glynn was in New York. He is back. Joseph Cooney was in Australia then. He is back and thundered into the local championship with Sarsfields. Micheál Donoghue used the league to give as many players as many opportunities as he could.

If Galway learned anything over the course of an epic defence of their All-Ireland last summer, it’s that they were stretched for depth at the crucial part of the season. It was a useful spring, but if an underwhelming semi-final exit against Waterford was a minor concern then the significant injury suffered by Joe Canning in that match leaves several question marks hovering over the squad.

Anyone who enjoys Irish sport will hope that the Portumna man, 30 years old now, will regain fitness in time to play a part in this championship. But the imprecise length of his recovery time complicates the various challenges facing Galway as they attempt to return to the All-Ireland final for the third successive year.

Who becomes the figurehead of the team in Canning’s absence? Can they return to the defensive pack-mentality of 2017? Can they achieve such consistency for a third successive year? Do they hang their hat on Glynn’s aerial threat?

In 2017, Galway won the All-Ireland scoring just two goals along the way; last summer they hit 12. But just four of those came at the pinnacle of the championship - two in two games in the semi-final against Clare and two in that riveting eight minutes of injury-time against Limerick.

It was goals that propelled the Treaty county to the title: three against Cork in the semi-final and another three that kept Galway chasing throughout that final. What kind of goal threat will Galway present this summer?

These are among the challenges facing the team ahead of their opening game in Salthill against Carlow on Sunday afternoon.

“Well, the first major challenge is to play and perform to their full potential,” says former All-Ireland winner and coach Noel Lane.

“To do that, training must have a very high intensity by all involved. Injuries must be managed. We all know Joe has had a serious injury and is looking at a 14 to 16 week break. And I think that for Galway’s management challenge that the panel accepts that and raises their game and gets on with it.

“Even the management of it by Joe, who is doing everything he can to regain fitness and all of that and to remain mentally tough and hope that maybe later in the year that he will be able to contribute something. But in the meantime it’s important that other players accept this and move on and step up to the plate. They are going to have to achieve a high physical and mental strength because small margins in those areas - skill levels, physical strength - will be critical.”

That they managed to reduce the final score to a point was a combination of their relentless belief and a young Limerick team trying to land the county’s first All-Ireland since 1973. If the Galway hurling fraternity was disappointed after the day, it felt different to previous losses.

“The euphoria of winning the thing in 2017 meant that supporters in general knew Galway hadn’t become a bad team overnight,” Lane points out. “A few things didn’t go right. And the other thing that contributed to there not being much criticism is the fact that it was Limerick, who were superb last year and great champions. They punished mistakes Galway made severely. So the disappointment was huge but there was a sense that this team could come back.”

“That was a very good team but the championship wasn’t as competitive then so it’s not comparing like with like,” he says of the 1980s side. “The whole game- the mental approach and preparation and the science of the game has moved to a different level.”

When Canning appeared at a launch last week, he was inevitably asked about when he would return to maroon colours and was necessarily ambivalent in his replies. The truth is that he doesn’t know. The presumption that Galway would just automatically appear in the All-Ireland quarter final series, scheduled for July 13/14th, left him wary. “How do we know if we’re even going to get out of Leinster?” he asked. “I’m not even thinking about that.”

His reticence is understandable. But there is a good reason why the Galway hurling championship is suspended indefinitely. A big year beckons. Their All-Ireland quest begins with the low-altitude visit of Carlow, who achieved a famous 0-20 apiece draw against Galway in the league.

After that, the pace will quicken quickly. Everyone knows the class and power within this Galway squad. How all of that potency is unleashed during Canning’s indefinite absence will be fascinating to observe through the furious early stages of the championship.