GAA Statistics: The 13 adopted sons of the football championship 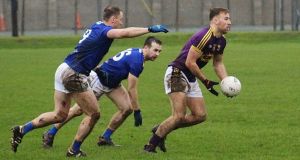 So far this year Wexford have lost four of seven Division Four league games – including defeats to Waterford and London. Their one shining light has been the performances of Jonathan Bealin, and well, he’s not even from Wexford.

He’s one of 13 players currently in an intercounty senior squad, who have either transferred club from a different county or qualify via the parentage rule. Not including New York or London, 10 of the 31 counties in the football championship have players involved who have switched counties.

The Dublin native finished as the top scorer in Division Four, with only Westmeath’s Ger Egan, Kerry’s Seán O’Shea and Evan O’Carroll of Laois scoring more than him across all of the divisions in the national football league.

And they all played a game more than him too – O’Shea scored 1-55 as Kerry won Division One, he was topped only by Egan who scored 3-50 as Westmeath won Division Three, and it was O’Carroll’s Laois team who they edged in that decider. The former UCD student scored 1-41 in his eight league appearances.

Bealin, meanwhile, managed 0-42 in seven matches, with 0-30 of his points coming from frees. The former Parnells clubman has alone scored 40 per cent of Wexford’s league total, and his average of 0-6 per match is higher than O’Carroll’s and just a point off Egan and O’Shea’s averages.

Bealin is one of six Dublin club players to have switched counties in search of intercounty football ahead of the 2019 season - making up almost half of the 2019 championship's 13 players who are on squads for their adopted counties. Little wonder given the strength of Jim Gavin’s five-in-a-row chasing Dublin panel.

The other five Dubliners are: Skerries Harps defender Jack Smith who is eligible for Westmeath under the parentage rule. Like Bealin, a former DCU Sigerson team defender, his father played for Westmeath back in the 1980s and 1990s.

In the recent past Wicklow have had the likes of Paul Cunningham, Austin O’Malley, Brian Coen and Tommy Walsh come into the county and this year Oisín Manning of St Jude’s and Davy Devereux of Ballinteer St John’s have been added to their squad. Devereux is a brother of former Dublin defender, Nicky.

Former Roscommon player Mark Nally was involved in the Longford squad in 2018, this year though their only ‘outsider’ is Kevin Gilmore, another Skerries Harps player. The sixth Dublin export also headed for the Midlands – Kilmacud Crokes’ talented attacker Shane Horan is now on the Offaly squad.

Kerry’s Conor Cox also made a switch under the parentage rule in the off-season, the former Kerry underage and UCC attacker has joined Roscommon, and during the league the expert free-taker registered 1-25 in six league matches.

Not included in the 13 players referenced is another Kerry native Chris Crowley – he was Carlow’s Player of the Year in 2017 but left the squad and county following this year’s league campaign. Neither is Limerick attacker Pádraig de Brún - when his family relocated several years ago he opted to remain with the Firies club in Kerry. But he played underage football with Limerick, and has since graduated to the senior squad.

Similarly Kildare talisman Kevin Feely played on Waterford football and hurling development squads before his family moved to Athy, and he of course went on to play for Kildare at every grade. Feely would now consider himself, and be considered, Kildare through and through.

So along with Cox and the six Dubs - Mayo native Eoghan Collins (a nephew of manager Colm) is on the Clare senior football squad. However, he has remained with the Ballyhaunis club back west. In recent years Clare have had Dubliners Shane McGrath, Pat Burke and Conor Talty come in and give their squad a boost, yet none remain.

Former All Star nominee James Loughrey has gone from being Antrim’s key man to a Cork regular since his move to Mallow in 2013. Former Meath junior player Oisín Kernan switched club and then county to make his breakthrough with Cavan, and Leitrim’s Paul Brennan transferred to Donegal club Bundoran in 2014 before establishing himself on the county team shortly afterwards. Brendan Gallagher from Lucan Sarsfields in Dublin had played for Leitrim up until the end of the 2018 season.

Stephen Keeley transferred to Adare from the Oliver Plunkett's club in Louth two years ago, and he is on this year's Limerick panel. While along with Bealin, Wexford have also availed of the services of David Shannon from Cork.

According to the various county board officials, no other current intercounty panellist has come in from another county to make up their 2019 squad.

This weekend, Wexford will require Bealin to be at his best if they can pull off a shock result against Louth in the Leinster championship first round. Wexford have won only one match against a non Division Four county since June 2015.

Unlike the other five Dubs mentioned he doesn’t qualify under the parentage rule, however, he was the star of the Wexford minor team in 2010. His father Paul – a former All-Ireland winning Dublin midfielder – had previously managed the county’s senior team and his son joined ranks for a short time too. Albeit he soon returned to Dublin and the Parnells club, awaiting a call up for his native county that never came.

This despite impressing for and captaining his club team, and lining out for the DCU Sigerson Cup team. This year he transferred to the Castletown club in Wexford and within a dismal league campaign he has consistently been a standout player for the yellow bellies.

He’s featured at both centre and full forward, despite previously being a regular at midfield for Parnells, and even a halfback in his time with DCU. A towering presence, like his father, Bealin is a very natural footballer who is capable of bettering any defender when he is fully tuned in and has the bit between his teeth. He's also a dead-eye free taker.

The adopted Wexford man is one of seven players who will be wearing the jersey of their new county this weekend – most will be out to prove a point – but few will be as relied upon as him.

*Since the date of publishing, Carlow GAA have confirmed that their goalkeeper Robert Sansom is a Louth native. Making it 14 players currently in an intercounty senior squad, who have either transferred club from a different county or qualify via the parentage rule.*