GAA Statistics: New York not doing enough to promote their own 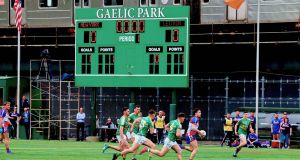 This weekend will mark New York’s 21st year in the Connacht championship – to date they’ve used 217 players and 60 per cent of those have only played one competitive match.

Since their inaugural year in the competition, back in 1999, only 11 New York natives have featured in a championship match. And only 12 Americans – in 1999 Emmet Haughian from Chicago was the team’s goalkeeper.

This is regardless of the huge interest and finance within the GAA in the city’s Irish communities. In New York’s first five years competing in Connacht, they had five Americans make it on to the pitch; in the past five years only three have featured.

So, 205 of New York’s 217 players have been from Ireland and 130 of them have only played one match. There are 47 New York players who lined out for two years, 14 have stuck around for three, and the same number for four years. Nine players have played for five years, two played for seven years, and Donegal native Gary Dowd has made the most appearances for New York after eight matches. Only 70 players have featured in consecutive years.

The only New Yorker to have played more than four times for their Gaelic football team is Kevin Lilly who made seven appearances over seven years. He scored 0-13 in those appearances, five points short of the team’s Connacht championship all-time leading scorer who is Monaghan native Michael Slowey. He contributed 2-11 over three years.

Slowey, who also appeared in the All-Ireland championship for his own county, also shares the record for the New York player who scored the most in one match. Both Slowey, in 2002, and Armagh’s Eugene McVerry in 2007 scored 1-5 for the Bronx-based team.

Seventy different players have scored for New York in those 20 matches, as the team have yet to register a first win. Their two best efforts were bringing Leitrim to extra time twice, the latest heartbreak coming last year.

Their average score is 0-11, their average concession is 1-20, and their opponents this weekend are the team they have struggled with the most over the years. New York have now played four matches against each of the five Connacht counties, and their biggest ever defeat came against Mayo in 2004. The year after they had first brought Leitrim to extra time. New York’s average losing margin against Mayo is 19 points.

Surprisingly Sligo – who along with Leitrim would be one of the teams New York over the years would be really targeting for that elusive win – have the next best winning margin over New York. That is 15 points.

New York’s losing margin against Galway is 13 points. Leitrim are next up with a 10-point winning margin, meaning New York have actually fared best against Roscommon over the years – they have a losing margin of only nine points against the Rossies.

Since 1999, 29 of Ireland’s 32 counties have contributed players to the New York football team, while the only counties not to have are Kilkenny, Louth and Carlow.

The counties with the most representatives on the New York teams are Kerry with 21, Armagh with 18, Donegal and Cavan with 13 and Mayo with 12 players.

And then there’s New York, along with Galway, Down and Monaghan with 11 players.

“I never felt there was a big difference with the Irish lads coming over. The only thing was, I don’t want to say bias, but the boys coming over and the big names were always given the respect. And it sometimes made it difficult for homegrown players to do well.”

After making four championship appearances for New York, Molloy impressed then Donegal manager Jim McGuinness in an All Star exhibition match and was invited to train with the panel back in Ireland. He accepted and after a year and a bit with the Donegal squad he still remains in Ireland. He lives in Dublin and plays his club football in Donegal.

“The players are there,” he insists. “They just don’t carry them through. If you look at the féile teams we’re sending over, at U14 we’re trouncing teams and I don’t know why that isn’t carrying over. We started in division five in féile and now we’re winning division one and two regularly and I don’t think the senior board is doing enough to bring those lads right through.

“Five years later, from 18, 19, 20 they should be pushing into that New York senior team. And they haven’t, and there are a few boys I can think of who should’ve been and they’re not. There’s not a development plan in place as such, I think a lot more needs to be done. Trying to get into the schools, trying to get into the communities. That’s how you’ll get the game to grow. But right now, there’s not enough being done for Americans.”

Molloy says there have been 10 Americans involved in this year’s preparations to take on Mayo, and while expectations stateside are low, “it wouldn’t be any worse of a hammering if you put out the Yanks and build on it”.

“I don’t want to cast it in a negative light as it’s been massive in my life, but they haven’t done enough to bring through the Americans and there is a playing population there. Any big-name Paddy who kicked a couple of points in a club match is raced in ahead of the Yank. And that’s always what’s happened.”

No doubt the balance New York GAA have been striking - between drafting Irish emigrants and developing local talent - has not worked in the short or long term. While beating Mayo is likely too big a stretch for any improved formula, 11 New Yorkers in 20 years is not good enough.

1 Betting shops face uncertain future as they prepare for Monday reopening
2 Tianna Bartoletta: ‘After you’ve gotten your medal, you become black in America again’
3 Kameko shocks Pinatubo in 2,000 Guineas at Newmarket
4 Sideline Cut: Marcus Rashford proves himself a leading man off the pitch also
5 Ian O’Riordan: An education in race and running during college days in America
Real news has value SUBSCRIBE