Tipperary at full tilt for start of Munster football championship

‘If we had everyone at 100%, this is actually our strongest ever panel,’ says Liam Kearns 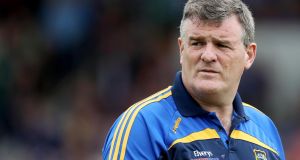 Tipperary manager Liam Kearns: ‘The relegation was very disappointing, because we nearly got promoted the previous year, and I feel we are a division two team.’ Photograph: Tommy Dickson/Inpho

Despite the still fresh taste of relegation, Liam Kearns believes Tipperary boast their strongest ever panel going into the Munster football championship – provided they can all stay fit.

Kearns isn’t making any great predictions either. After his Tipperary team joined Cork in being relegated to Division Three of the league, only Kerry and Clare are operating out of division one or two.

Tipperary open their campaign at Semple Stadium on Saturday evening against Limerick, who finished second bottom on division four, while Clare face Waterford, another division four team, at Cusack Park (both games with a 7pm throw-in).

“The relegation was very disappointing, because we nearly got promoted the previous year, and I feel we are a division two team,” says Kearns. “But the tables don’t lie. Cork, ourselves and Clare were fighting relegation, two of us went down, and that’s where Munster teams are at the moment. You can have all the excuses you want.”

Kearns is heading into his fourth championship campaign as Tipperary football manager, having guided them to the exalted heights of the All-Ireland semi-final in 2016, where they lost to Mayo; “If we had everyone at 100 per cent, I think this is actually our strongest ever panel. And I would have a lot of faith in this panel if everyone was at their best.

“At one stage in the league, I think it was the Armagh game, we were down 12 players. We have the injured players back. Josh Keane is back, Michael Quinlivan, Shane O’Connell, Gavin Whelan, we have them all on the field. We’re due a break now, and feel we are. Hopefully they stay fit for the remainder of the year.

“Robbie Kiely is back about three or four weeks, but he spent six months travelling around the world. Bill Maher after an Achilles tendon, nine months, and that’s a long time. But they’re both on the training panel now, working away, it’s just time.

“Another month before the championship would have been nice, but that’s not the reality. We’re on the back foot since the start of the year, and we’re desperately trying to get on to the front foot. But these next two games will tell us whether we can salvage something or not.”