Jason Forde in scoring prime as Tipperary look to strike back 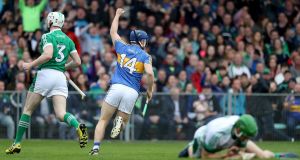 Anyone looking for the silver lining in the cloud left hanging over Tipperary hurling last summer will have found it in Jason Forde. Unable to win a single game in the new round-robin format, Tipperary’s season was over by June 10th – only Forde’s own scoring statistics still held up as the finest of the summer.

His 3-39 in four games was the highest average score of anyone, 12 points per game, and his 1-14 against Waterford was also the highest tally in a single game, two more than Joe Canning hit against Kilkenny.

Forde also ended up the only Tipperary player to be nominated for an All Star, among the 18 forwards, and 45 hurling nominations in all. After failing to win a single game (drawing against Cork and Waterford, losing to Limerick and Clare), this was at least something for Tipperary to be cheerful about.

None of this comes as any great consolation to Forde, who also scored 7-72 in Tipperary’s 2018 league campaign, bringing his annual tally to an impressive 10 goals and 111 points.

“Every year to try to push on, but when you don’t progress, it doesn’t mean much, because we were out to win some silverware, and that always outweighs anything you do personally,” says Forde, who at 25 is now coming into his hurling prime.

“Lads didn’t really know what to do with themselves, being out so early. But you have to use that as fuel, motivation, for this year, to make sure it doesn’t happen again. It’s after coming on us very quick, so just looking forward to getting going now. That’s what all the pre-season and training is about, to train in these big Munster championship games.”

That starts again on Sunday with the trip to Páirc Uí Chaoimh to face two-time defending provincial champions Cork. Tipperary did get the better of them during the league, but it’s no great secret that league form this year will have little bearing on the summer; especially after a league that had no promotion or relegation.

“The league was so up and down. And teams are tailoring their training to peak at different teams. Look at Cork’s form in Munster, they are the form team. And we know that going down to Páirc Uí Chaoimh. In the old championship, it would nearly be the same 15 going out, every week, but this way, anyone could be playing, and it’s a change of mindset. It all feels like we’re starting new again, and last season is put to the back of the mind. We’re trying to learn from it, but trying to move on as well.”

An equally prolific scorer in the minor at especially under-21 ranks, Forde can also consider 2018 a sort of breakthrough summer in the senior jersey, even if it was all cut short. The Silvermines man also won two Fitzgibbon Cup titles with the University of Limerick in recent years, and admits he made an extra effort to kick on going into 2018, working with a personal trainer Matt Cooney, at MC Future Fitness in Nenagh.

“It takes a while [to breakthrough], last year, I decided on some extra work, with a personal trainer for a few months, and maintained that, I was back with him again this year. I suppose I have been knocking around a few years now, and I’m in the middle sort of cohort. Last year I’d a good run, played every game in the league, a good run in Fitzgibbon too, so from a personal point of view it probably was my best year, with Tipp. But obviously disappointed with the way it finished.”

Now finished in UL, and teaching at Nenagh College, it’s not yet entirely clear if Forde will handle the free-taking duties this summer, returning Tipperary manager Liam Sheedy mixing it up with Seamus Callanan during the league.

“To be honest, that doesn’t enter our heads. It is at the stage now when you can’t even miss one free. But more is made of that than probably needs to be. It’s whoever the manager decides to trust, we’ll be ready to do. We’ve a few more good strikers, Bubbles [O’Dwyer], so whoever we decide to go with.”

Not surprisingly Forde has nothing but full praise for Sheedy, who came back on board this season after unexpectedly stepping down in the aftermath of Tipperary’s 2010 All-Ireland success over Kilkenny, halting the Cats’ famed “drive-for-five” in the process.

“Just his professional background, I think that transfers into players, how to get the most out of guys, and just really, really organised, with a very good backroom team around him as well. He’s brought in a bit of freshness as well, which was probably needed, and bringing in a lot of younger players brings some enthusiasm as well. So there’s a good buzz there at the moment.

“Eamon O’Shea has come back in the last while as well, added a few more layers to what we’re trying to do, so you’d be wise to listen to all of them.”