Late push by Clare slams the trapdoor shut on Tipperary 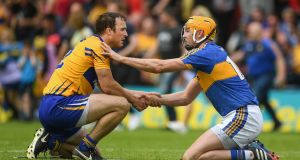 Patrick O’Connor of Clare and Seamus Callanan of Tipperary after the match at Semple Stadium in Thurles. Photograph: Ray McManus/Sportsfile via Getty Images

In days gone by, people used to turn up for CIE ‘mystery tours’: buy a ticket and be taken God knows where. All championship, the Munster hurling public – Tipperary followers in particular – have been living out this recreation of bygone days and Sunday in Thurles was no different.

For most of the 70 minutes the home side looked to have this match firmly under control. Clare led only for a few seconds, early in the first half and trailed more or less all the way until the last two minutes of injury-time.

Then, in an explosive ending, losing by a point they ran in three unanswered scores from Podge Collins, giving off the bench arguably the best performance since his 2013 pomp, and two from top marksman Peter Duggan, the coup de grace a phenomenal score from the right sideline in the dying seconds, reminiscent of how Tony Kelly finessed the 2016 league final in the same stadium.

The key score however came in the 65th minute with Tipperary ahead by four, 1-19 to 0-18. The chance of an extended lead went a begging when Jake Morris hit the post and within 20 seconds of the clearance Collins went on a raiding run before passing to replacement Ian Galvin who side-stepped and finished precisely to the net to leave just a point between the teams.

“He showed tremendous composure but look, Ian’s an assassin. He’s been showing that form all year in training and ultimately we challenged him all week that ‘you need to deliver on the promise you’ve been showing in training,’ said Clare joint-manager Gerry O’Connor.

This was the first championship fixture between the counties in Semple Stadium in 33 years and Clare’s first win in one since 1928.

“Look it,” said O’Connor, “we pulled it out of the fire because for the whole 75 to 80 minutes that we were out there on the field, we never let up.

“The character and the actual skill-sets and the stamina and the mentality and physicality of our team were tested to the absolute limit. We gave it in spades. It wasn’t the complete performance by any means but it was a fantastic performance when we absolutely had to give a performance in that last 10 or 15 minutes.”

So Tipp were counted out: their fourth match of the round-robin series and not a single win to show for it. They become, along with Waterford, one of the first two counties under the new Munster format to find themselves becalmed in early June – a sobering fate for two of last year’s All-Ireland semi-finalists.

Having thrived and sagged randomly in their Munster hurling championship matches to date, the 2016 All-Ireland champions reversed the recent trend of being present in body only for the first half and instead looked like world beaters for 20 minutes.

Their forwards clicked, Jason Forde was his usual impeccable self from placed balls and their defence coped easily with the disjointed efforts of the Clare attack. In the 13th minute Billy McCarthy sliced through the Clare defence and cracked in a goal for a six-point lead, 1-4 to 0-1 – an advantage that expanded a high point of eight in the 26th minute.

The most effective way of slowing them down was Hawk-Eye, the score detection system, which laboured mightily over two adjudications and left the electronic board in the ground inscrutably blank. Television viewers were able to see that both John Conlon and Séamus Callanan had put their shots wide but spectators in Semple Stadium had to infer as much by the unmoved scoreboard.

By then it was hardly noticed that Dan McCormack had had to retire injured after a spectacular aerial collision with Tony Kelly as early as the 10th minute but as the match unfolded, the loss and consequent disruption of Michael Ryan’s substitution policy became clearer.

Clare’s defence was under pressure but tried to play out deliberately and thoughtfully – at times with too much calculation when the forwards needed to get into the game – but the forwards struggled, fumbling ball through leaden touches and frequently getting turned over: in the 28th minute possession was dropped twice.

Aside from this clumsiness accuracy was poor apart from Duggan’s pinpoint free taking. Of all people, Tony Kelly shot three successive first-half wides before retuning his radar before half-time.

Significantly though, Clare responded from the low point of the 0-5 to 1-10 deficit by reeling off four scores before the break, two each for Kelly and Duggan to leave it 0-9 to 1-10.

Tipperary didn’t panic and kept the margin at four or five as the second half progressed. Clare continued to lack sharpness. In the 45th minute after more fostering in attack, the ball was whipped away by Cathal Barrett and at the other end in trying to control it, corner back Jack Browne succeeded only in conceding a 65, which Forde converted for 1-14 to 0-11.

Clare mounted a serious revival at this point, outscoring Tipp by 0-5 to 0-1, but if anything pointed to it being the home side’s day it was the manner in which they steadied at this point and scored the next three points.

The goal changed everything for Tipp, who had by then lost Brendan Maher to a worrying looking knee injury, and they faltered, fatally.

Injury-time proved calamitous. Again, they looked in control when David McInerney was penalised for over-carrying but inexplicably Forde missed the free from 50 metres.

Michael Ryan, the Tipperary manager, was asked whether their fourth successive week had been an issue given that Clare had had a rest week.

“I didn’t see fatigue; if anything I saw the opposite. That was our performance out of four, albeit we didn’t get anything out of it. I know the writing was on the wall for us. We had to deliver a performance today to have a chance. I don’t think it hurt us today.”

He still has two years of his appointment left and declined to speculate any further on his future.

“It’s premature lads to be honest. Any decision that we make on that, we’ll make them in the cold light of day. There’s never any good decisions made immediately after a match, be it a win or a loss so look, the only thing we care about is a very fine bunch of players inside there in that dressing room and the biggest thing, the overall thing is the health of Tipperary hurling.”

TV View: Woolly hats fuel Roy’s forebodings as Liverpool secure place on perch 06:00
Shane Lowry agreeing to play in Saudi Arabia is an unfortunate choice 06:00
Leinster made to work hard to maintain 100 per cent record 01:13
Corofin and Ballyhale frank their greatness at headquarters 01:03
Minella Till Dawn favourite to bridge long Thyestes gap for JP McManus 01:00
Crossword Get access to over 6,000 interactive crosswords