Limerick continue their rise to beat Waterford by 13 points 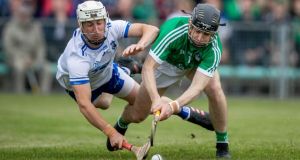 “That’s not tactics honey. That’s just the beast in me.” Elvis Presley said that in Jailhouse Rock, and it captures too the essence of hurling coming out of Limerick right now.

They are intimately organised yes, and perfectly drilled and skilled, but then there’s the attitude: if Limerick are going to be beaten this summer it will definitely be by the better team because there is no holding them back, in will or spirit.

Waterford felt the brute force of it here – made to look limestone pavement flat on the day that their entire season hinged on. In the end Limerick had 13 points to spare, both eyes still on the Munster final. A draw against Clare in Ennis next Sunday would be enough to see them through. That they’re still right in the thick of things is plenty good for now.

For Waterford and also Tipperary – who lost to Clare up at Semple Stadium – it’s curtain time. Waterford still have to play Cork, the only interest being Cork’s inclusion in that three-horse race for the final. Then it’s over – including the five-year term of manager Derek McGrath, who has indicated this would be his last lap.

Everything about Limerick’s season to date suggests they were playing under a new treaty, and that continued here. Shane Dowling made his first start of the season, the Na Piarsaigh man coming in for the suspended Aaron Gillane, and hitting 0-15, including two from play. His one wide was out close to the sideline and his overall contribution was immense.

They produced nine different scorers, Cian Lynch playing like loose electricity around midfield, scoring 0-3. He got a standing ovation coming off. Gearóid Hegarty and Graeme Mulcahy bagged the goals inside the first quarter hour and Limerick were soon 11 points to the good. Teenager Kyle Hayes scored two beauties and could have bagged a goal in the second half too.

“We got off to a good start, won the battles where we needed to win them, made it count,” said manager John Kiely, with stone-faced understatement. “We worked the ball well moving forward, put it through the hands and had lots of runners available. I’d be happy with the performance. I think the most pleasing thing about it was when we got the lead we didn’t panic.

“There has been incremental improvement week-to-week and I would expect the same next week. We are enjoying each week, as well. This is all to be enjoyed. It is very important that management, players and everybody else enjoys this. We have had enough of difficult days in Limerick, so let us enjoy the good days. Let it not be a burden to be playing well. Limerick people can be very proud of this team, they should be and they are.”

Before another bumper attendance of 23,194 at the Gaelic Grounds, interest in the round-robin format still soaring, it was both a marker and a warning: this is a serious Limerick team capable of serious business.

“I think Shane Dowling brought a new energy to the inside line as well, freed up Séamus Flanagan to hit the wings a bit more,” added Kiely. “They worked really, really hard as a forward unit, were very unselfish with the ball as well. We have a tough assignment next, but it’s obviously a very enjoyable prospect as well. It will be a phenomenal atmosphere down there, there’s a lot at stake and you’ll have two teams that go toe to toe for it. Let’s go at it and see how we get on.”

With Declan Hannon leading by example in Limerick’s defence, Waterford were repeatedly pushed out, their first loss to Limerick since the 2007 All-Ireland semi-final. After reeling off five slick points to Waterford’s two, Hegarty struck the net first on 10 minutes, completing a beautiful passage of passes from Hayes and Séamus Flanagan, his finish giving Stephen O’Keeffe no chance.

Four minutes later, O’Keeffe was cursing himself after failing to control a ground ball sent in by Flanagan: Graeme Mulcahy swept in, edging the ball over the line ahead of Conor Gleeson. Two more points and Limerick were 2-7 to 0-2 in front, and motoring.

Waterford briefly rallied, a Pauric Mahony free ending their 16-minute scoring drought, but it was finger in the dyke stuff: Limerick hit back with another six unanswered points, and went into the break 13 points to the good, 2-14 to 0-7.

They gave Waterford little hope or chance of any comeback in the second half, even with Tommy Ryan sneaking through for a goal early on, and after losing to Clare and drawing with Tipperary, their season ends here.

What could Derek McGrath say?

“Not much really. They are devastated themselves. They obviously know the implications of the defeat – the championship is over. I put it down to Limerick’s absolute physicality of approach, their stability to be at the pitch. I put it as much down to Limerick’s, not brilliance, but I thought they were pitch-perfect. You really can’t blame anything other than it’s a hurling game and you come into the intensity levels Limerick brought you struggle.”