Mayo reveal their ruthless streak to sink Limerick with ease 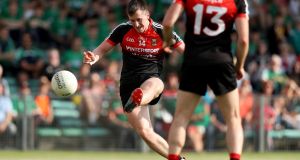 Mayo captain Cillian O’Connor scores one of his three goals in the victory over Limerick at the Gaelic Grounds. Photograph: Oisin Keniry/Inpho

Mayo have been accused in the past of lacking that ruthless streak when it comes to putting teams away but they answered those critics in emphatic style at the Gaelic Grounds in Limerick on Saturday, comfortably booking their place in round two of the qualifiers.

When Limerick took the lead with a penalty after just four minutes there was slight unease among the huge travelling Mayo support in a crowd of over 8,000 in sweltering heat. But by the end of the evening, record books were being consulted as Cillian O’Connor overtook Conor Mortimer as Mayo’s all-time top championship scorer, the Mayo captain now chasing Colm “Gooch” Cooper down for the national record which the Kerryman holds with 22 points to spare.

Mayo manager Stephen Rochford has to be pleased with his team’s performance but he was not jumping for joy afterwards, preferring to keep the feet firmly on the ground, pointing out that it took his side longer than expected to see off Limerick.

“In any of these games it’s about getting a result and getting yourself into the next bowl,” he said. “That’s what we achieved. After conceding the early penalty I thought we controlled the game, and we were a lot more ruthless in the second half.

“We knew we had prepared well coming down, and it was good to see part of it coming off but I wouldn’t say it was a polished performance either.”

O’Connor rattled off three points from play to erase that early goal from a Sean McSweeney penalty and once he scored Mayo’s fourth point from a ‘45, they moved into a lead they would never relinquish and were 1-10 to 1-1 ahead at the break, O’Connor getting the first of his hat-trick of goals on the 30-minute mark.

The biggest cheer of the day came for Lee Keegan, making his first appearance since being injured in the league clash with Tyrone last March, while the arrival of Andy Moran also proved significant as he went on to score two goals.

However, it was Limerick who struck first after the break with a superb goal from substitute Seamus O’Carroll. Danny Neville floated in a superb 40-yard pass which found the Limerick man lurking behind Keith Higgins.

That goal made it 1-15 to 2-5 on 54 minutes but it only served to reignite Mayo who scored three goals in a space of two minutes, O’Connor scoring a brace to complete his hat-trick and also setting up Moran for the first of his goals.

There was a late consolation for Limerick when O’Carroll scored from the penalty spot but it was all too little too late.

1 Cheltenham faces criticism after racegoers suffer Covid-19 symptoms
2 My favourite sporting moment: Shels finally make all the heartbreak worth it
3 Sport will be last duck in the row in return to normality after coronavirus
4 Even 60 years on, French rugby tome still holds water
5 Coronavirus crisis could cost the GAA up to €60 million
Real news has value SUBSCRIBE

Ian O’Riordan: Learning to run for the first time all over again 19:00
Davy Russell ponders what might have been for Tiger Roll 18:07
Cycling Ireland thrilled with take-up for Zwift League series 17:02
Racetrack organisation does not envisage any closures in the short-term 15:03
Coronavirus crisis could cost the GAA up to €60 million 14:19
Crossword Get access to over 6,000 interactive crosswords