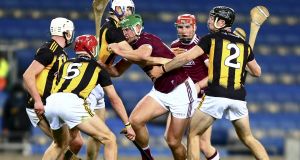 Galway lost out to Kilkenny by two points having led by five with 15 minutes remaining, and Hayes thinks the defeat could affect confidence levels in the camp ahead of their knockout clash with Tipp.

“It will be interesting to see if losing the Leinster final will drain Galway’s confidence. You have to be straight about things . . . Galway blew that match against Kilkenny,” said Hayes, who played 14 years of inter-county hurling for Galway.

“They were five points up and just completely fell asleep. I think Brian Cody was in a state of shock after the match that they won that game.

“I wouldn’t say I’m confident. I think the first game against Limerick, I think Tipp went in very cold. I don’t think they did themselves justice. I think that game the last day, Tipp beating Cork, I think it will give them an awful lot of confidence.

“We’re at knockout hurling now and I think that brings out the best in an awful lot of players, with that competitive edge. I am really looking forward to sitting down and watching it,” said the triple All Star, who is all too familiar with Tipperary having lived on the border with them and coached Borrisokane.

Tipperary come into the game on the back of a 2-18 to 1-17 qualifier win over Cork, and facing the All-Ireland champions, Hayes reckons former captain David Burke could be the player to settle the Tribesmen.

The St Thomas man has been named on the subs bench in Galway’s two championship games against Wexford and Kilkenny so far, but has only featured in the final 11 minutes against the Cats.

And the Portumna attacker thinks Galway also have plenty of work to do tactically on their recently introduced sweeper system.

“I would definitely be using David Burke. I’d have to say I was surprised that David Burke wasn’t on the first day, whether he was injured or not I don’t really know. When he came in the last day he made an instant impact.

“I was surprised that there was a Galway sweeper too, whether this is a new Galway game plan. Padraic Mannion was the sweeper, but when Galway needed him the most as a sweeper for the last 15 minutes when Richie Hogan came on into the full-forward line, he wasn’t where he should be.

“The likes of Jason Flynn, I have great time for Jason Flynn. I think he’s a great hurler and I can’t understand why he can’t nail down a position on this Galway hurling team.

“He’ll need to look at corner-back as well. Sean Loftus had a rough half an hour, but maybe he should have been swapped to the other corner to give him a break.

“Then you have Niall Burke. Niall is on the team, he’s off the team and then when he’s taken off and seems happy enough with that, which I can’t understand. I do think there will be more changes in the Galway set up,” added Hayes, who, with 25 goals in 52 championship games, is second only to Portumna teammate Joe Canning as Galway’s all-time top goalscorer.