Mayo smother Roscommon from the off to book Connacht final spot 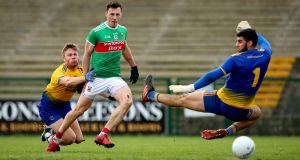 Mayo’s Diarmuid O’Connor scores the first goal of the game past Colm Lavin of Roscommon during the Connacht SFC semi-final. Photo: Ryan Byrne/Inpho

As these Sunday border dramas go, this was as routine as they come. The theatre goers picked a good day to stay at home. James Horan team had rumbled into another Connacht final against Galway next weekend before the teams broke for the first water-break here. They led 1-6 to 0-2 by then and had completely smashed whatever designs Roscommon had to test the more experienced team. If there was ever a border derby for the hordes to miss, this may have been it.

Mayo mixed old and new here: exemplary outings from Lee Keegan at corner-back and by Cillian O’Connor who led Mayo’s strike force at the other end and an encouraging midfield display from Matthew Ruane and Conor Loftus.

Everyone watches Mayo these days with only one question in mind. Can they do it? And everyone knows what it is. Nobody is much interested in how many Connacht medals this bunch finishes with. They simply bossed this dead day in Hyde Park to renew their rivalry with Pádraic Joyce’s sparkling young Galway team. It feels like a significant date.

This was a crushingly disappointing day for Roscommon. They just got caught got in the old Mayo vice grip and it’s tough to escape from. They battled admirably from that horrible first quarter disaster without ever seriously threatening to win the game, despite a nice shooting display late on from Diarmuid Murtagh and two distance place kicks by Conor Cox. But the afternoon rattled along to an inevitable conclusion.

What is different about Mayo this winter? What they have lost in physical heft in a midfield partnership of Séamus and Aidan O’Shea, they have gained in mobility. The frightening thing for the Rossies was that they acquitted themselves fairly well in their kick out, with Cathal Compton prominent in plucking ball through the crowded middle sector. But Mayo’s covering was relentless, with roving guerrilla raids on the Roscommon man in possession. They didn’t have time to think, let alone act. The five points they managed were scores on the hoof: an early mark from Cox, an opportunity from a rare misjudgement by Mayo on David Clarke’s kick out.

In the warm up Mayo spent a long period working the ball out of simulated defence under the ministrations of Ciarán McDonald. Once the match started, their transfer into the attacking half was slick and purposeful, with natural ball carriers like Patrick Durcan and Diarmuid O’Connor eating up ground in Douglas Hyde country.

The other big change – the crucial alteration – is the presence of Aidan O’Shea as an orthodox full-forward. It has been clear for several seasons that Mayo can’t have their cake and eat it here. O’Shea’s prowess in the air and his facility as a playmaker with his back to goal makes him a terrifying prospect for defenders.

The big gripe against Mayo in the first quarter was that even while they settled into a 0-6 to 0-2 lead, they didn’t hit O’Shea often enough. Every time he got the ball there was a clear and present danger. That came to bear in the 19th minute, when Diarmuid O’Connor cut back on the right side of Roscommon’s full-back line and neatly finished a goal from Kevin McLoughlin’s handpass.

But the reason all that space opened up was that six yellow shirts were drawn like magnets to the sight of O’Shea taking possession on the edge of the D. When he played deeper, Roscommon were forced to leave a covering defender, meaning more space for Mayo to exploit with the ball in hand. They were up 1-8 to 0-5 at half time and shouldn’t have been pleased with the total. They also had nine wides, at least half of which were poor options.

Cillian O’Connor doused any hope of a blazing Roscommon revival as soon as the second half began with an aggressive point from play and then another quick free. After that the game became curiously featureless as the athletes on both sides had come to accept the outcome. And, celebrated as the Mayo support base is, perhaps it was Roscommon who needed the masses here to inject a bit of wildness and anarchy to the afternoon.

They did rise themselves to three consecutive points, finishing with a sweet strike from Niall Daly after 54 minutes. But the rally ended there as Durcan came coursing through the entire Primrose defence to chip his second score and end any sense of rebellion. The Castlebar flier just keeps on getting better and, with Colm Boyle and Keith Higgins held in reverse, he is a natural leader of that division for Mayo.

On it went, in the vaguely unreal way of this championship. The thing is, it is real and authentic and already the number of teams who can get hold of the Sam Maguire is fairly select. Mayo remain among their number.