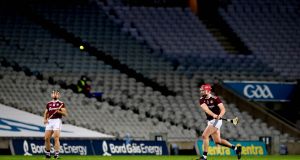 They may not be on the softer side of Saturday’s All-Ireland hurling quarter-final draw, only the less daunting side, Waterford avoiding defending champions Tipperary to face old Munster rivals Clare instead.

That game is set as the second quarter-final, fixed for Páirc Uí Chaoimh (3.45pm), Clare benefitting from an extra day of recovery after overcoming Wexford on Saturday. Clare manager Brian Lohan will also get to welcome back midfielder and captain David McInerney, who missed the Wexford game due to a one-match suspension.

McInerney was shown a straight red card coming up to half-time in the one-point defeat of Laois the previous Saturday, after an off-the-ball incident with Mark Kavanagh, and despite a mid-week appeal the suspension stood.

Clare were heavily reliant on Tony Kelly’s 1-15 haul to get them past Wexford, and only got the better of Waterford by a single point, 1-20 to 0-22, in the last championship meeting, the first game in the 2019 round-robin championship.

Before that, Liam Sheedy’s Tipperary will face off against 2017 All-Ireland champions Galway at the LIT Gaelic Grounds (1.15pm). Despite being fancied to win back the Leinster title on Saturday evening, Galway were taken out by Kilkenny, who now sit happily in one of the All-Ireland semi-final berths.

If Tipperary get the better of Galway on Saturday then another draw will be needed next Monday for the semi-finals, as Tipperary, Clare and Waterford have all already faced Limerick in this year’s championship.

A Galway win will see them face Limerick in the semi-finals with the winner of the other quarter-final taking on Kilkenny.

Tipperary edged past Cork by four points in their second round qualifier on Saturday, their two-time All-Ireland winning manager openly suggesting improvement was needed.

“We won’t be frightening anyone with that performance,” said Sheedy, “but at the same time, today was about just getting a result and getting back into the All-Ireland series, and we’re just thrilled to be back in an All-Ireland quarter-final next weekend.”