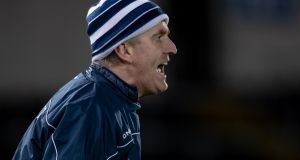 Limerick manager John Kiely was furious that his entire squad could not attend the Munster final. Photograph: Inpho

Any easing of the 26-player match day panel limit will be entirely dependent on the Government’s review of current Level 5 restrictions, which is set for this Thursday, four weeks into the latest six-week national lockdown.

This may or may not come in time for next month’s All-Ireland finals, and in the meantime the “unacceptable” situation as claimed by Limerick hurling manager John Kiely will prevail, given the GAA’s outright limit of 40 people from each county being permitted to attend each game.

“The whole basis of this is whether games must be played behind closed doors or not,” explained Feargal McGill, the GAA’s director of games administration and also part of its dedicated Covid-19 Advisory Group, set up back in May.

“As long as the restrictions say that games can only be played behind closed doors, then there can’t be any change to that. Behind closed doors means that only people who have an essential role can be in attendance, and unfortunately players who can’t play on the day, for whatever reason, are essentially then spectators, and that’s the interpretation we’ve been given on it.

“If that Government recommendation changes, yes there is potential, we will consider that, and the first people to be accommodated in any spectator scenario would be any additional panel members and any additional backroom members as well.”

Kiely spoke of being “offended” by that 26-player match day panel limit in the aftermath of Limerick’s Munster hurling final win over Waterford on Sunday, which sealed back-to-back provincial titles the first time in 39 years. The Munster Cup, he insisted, would only be presented at training on Tuesday night, when all current 36-panel members could be in attendance.

“There are 10 players at home which, in my view, is completely and utterly unacceptable given that I have 20 reporters standing in front of me,” stated Kiely. “I don’t agree with the premise that we can have 200-plus people in the stadium, which were here watching this match, when my 10 players are at home this morning, training number one in order to keep their load up to the equivalent level to ensure that if they do get called up next week they don’t get injured because their load isn’t right.”

Previously, non-playing team members could still travel with each team, even when not named in the 26-player match day panel, but under the GAA’s Return to Play protocols presented to the Government back in the summer, only those on the 26-strong match day squads are allowed into a stadium, along with 12 backroom officials, and two county officials.

“Every sport had to submit their own guidelines for approval, in terms of how they would operate, the sports that are currently operational,” added McGill. “And our guidelines were submitted and approved on the basis of 40 people from each county attending, no more. Limerick did make their case, and were given clarification on that.”

“Again that’s entirely a matter for the Government,” noted McGill. “We have no idea at this point in time about what they’re planning to do, or what the country will look like after December 1st. We’re obliged to just wait and see what they come up with, and then deal with it after that.”

When match stewards, officials, broadcast and media personal are included, along with the 40 permitted from each team, the match-day attendance does rise above 200, only the last thing the GAA intend on doing now is pressing their luck on the situation, with just five weekends of the championship still remaining.

“We’re happy with how things have gone. I suppose the Sligo (football) situation was the unfortunate one, in the middle of it all, but by and large it’s run off well, and we’ve a lot to be thankful for, to team mangers and players and all the people involved, for the way in which they have been following the guidelines.

“Hopefully we’ll be able to keep going, it looks like we will be, and get over the last few weeks without any major hiccups.”