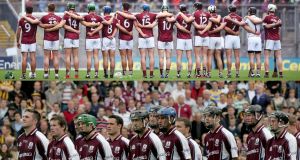 The 2017 team above the team who played in the 2005 All-Ireland final. Photographs: Inpho

Since their last All-Ireland hurling triumph in 1988, Galway have fallen short in seven finals.

Over that period the county have become renowned for producing diminutive, wristy hurlers. From Ollie Canning in defence to Damien Hayes up top – think of Galway hurling pre-2012 and Kevin Broderick’s wonder point against Kilkenny in 2001 is likely to spring to mind. All 5ft 8in and 11 stone of him, weaving his way through the Cats’ defence.

Since 2000 Galway have won six minor All-Irelands and three under-21s, and since 1988 they have a collection of nine minors and six under-21s. All that talent coming through, and yet no Liam MacCarthy?

In 2012 Anthony Cunningham took the reins and set out his stall. He was determined that he knew why. “Now you need a very physical and tall half-forward line and you need a strong half-back line so, yes, you’d have been looking for that type of player,” he explained at the time.

“The aerial battle and being able to win that – it’s one thing being able to do that at under-21 and another taking it to the next level. You don’t realise until you come across it first hand, the Kilkenny players and how good they are in the air or how strong Tipperary are in the air. In certain quarters you need your height, athleticism and physicality.”

Of all the long, contested balls in Galway’s one-point win over Tipperary, the Tribesmen won 60 per cent

Cunningham himself had won two All-Irelands as a player, in 1987 and 1988, and those Galway teams were certainly not lacking any physical edge. He had been hugely successful as a club football manager as well as winning the U-21 All-Ireland with Galway in 2011.

From then ‘til now Galway have prioritised ball-winning players over blooding some of the stars of their underage teams. And the acquisition of strength and conditioning coach Lukasz Kirszenstein this year (who previously worked with Tipperary) has only increased that focus.

The change in approach can be seen in the contrast between the team which reached the All-Ireland final in 2005, and that which has reached this year’s decider. In 2005, seven of the team were 5ft 10in or under and the average height of the starting 15 was also 5ft 10in.

The players who featured for Michael Donoghue’s team in the semi-final win over Tipperary have an average height of over 6ft 1in. Six of the players who featured that day are 6ft 2in or taller. They are a huge team, by the standards of any sport, and not a single player who featured in that last four clash is 5ft 10in or under (heights according to Galway GAA).

Of all the long, contested balls in Galway’s one-point win over Tipperary, the Tribesmen won 60 per cent. Their forwards caught seven balls cleanly, and won 16 of the 24 in-play balls which they contested. As well as winning 58 per cent of their own contested long puck-outs.

These figures would have been even higher only for Galway became very predictable as the second half wore on, going direct nearly every time, allowing the Tipp defence to commit numbers to the breaks. That’s a worry when you consider the sweeper system Waterford will deploy on Sunday.

The extra size and power certainly helps the team in an attacking sense, and it does so defensively too. This year Galway have dropped their average concession from 1-20 per match in 2016 to 1-15 this season. The Galway defence won 15 of the 22 balls lumped in on them against Tipp.

Central to that has been their new defensive axis of full back Daithí Burke and centre back Gearóid McInerney.

The latter was man of the match against Tipp after a monstrous second-half performance. And Burke has conceded just 0-5 (from play) to the four men he has started on thus far in this year’s championship. They are Donal Burke, Shane Dooley, Jack Guiney and Séamus Callanan.

Against Tipp he made four interceptions and made one massive catch. McInerney meanwhile, at 6ft 3in and around 100kg, caught three balls in that second period. He’s not all brawn though, all eight of his passes were short deliveries as he looked to take the contact and then retain possession. A cool head on big shoulders.

In the 10 years before this summer, Galway had played 14 different players at full back in championship games. And had eight different centre backs. In 1988 Conor Hayes would play full back, the late and great Tony Keady was No 6, and the centre of Galway’s defence was always rock solid.

Hurling has changed but fans out west will be hoping this year’s combination can bring back those glory days.

As well as being a lot bigger, this team is also older – peak age you could argue. The class of 2005 had an average of under 24, as opposed to this year’s team whose average age is 26. There is only one player under 22 years of age, in 2005 there were three and two more who were 22.

So a more experienced team takes to the field on Sunday, a generation who have learned from the failings of the last. And they’ll be hoping that bigger really is better.