Dan Shanahan: Hurling ‘kept me on the straight and narrow’ 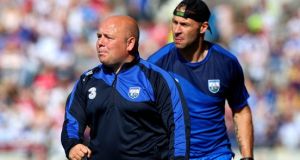 Dan Shanahan can remember exactly where he was and what he was doing. It was the 1994 Munster minor hurling final - 23 years ago already - and nearing the end of a losing battle with Cork, Shanahan was approached by teammate Derek McGrath. Then a little whisper in his ear.

“Never forget the day,” says Shanahan. “I was getting a bit of stick in a Munster final, Derek just came out and said don’t listen to them. I’d never forget that moment... ‘don’t worry, keep going’.

“It stuck with me to this day. It’s something I always remember about Derek. A fantastic hurler underage. St Saviour’s he was with, at the time, it’s back a good bit ago now.

“We have a good dynamic together. Little and large maybe! When he asked me four years ago to come in there, there was the Maurice situation (Dan’s brother). What would it be? How would it be like? Him being there, would it affect us? I had a chat with him and in a day I got back to him and took a chance.”

And the rest is Waterford hurling history. Together again in Croke Park on Sunday, McGrath as manager, Shanahan as selector, their bond is also a microcosm of all that Waterford are playing for in this All-Ireland hurling final: the 58 years of waiting, yes, and also all of what McGrath and Shanahan dared themselves to hope for.

No wonder Shanahan recalls that day: McGrath’s words, and subsequent influence of hurling, helped shape Shanahan’s life in ways he’ll never fully understand. He was hurler of the year 10 years ago, and can hardly imagine where he might be had he gone down a different road.

“I would probably be locked up, to be honest with you,” he says, before realising his slight if not entirely untrue exaggeration.

“I wouldn’t say I’d be locked up – I’m blackguarding – but it kept me on the straight and narrow. It kept me away from the bad side of the social life and kept me focused.

“I don’t know I’d be where only for hurling, Waterford hurling and my club Lismore. It started as a young fella and it’s just something I have. I suppose I was alright but I worked at being good at it. I had to work at it. Other lads were just gifted. Eoin Kelly was just gifted, Tony (Browne), I had to work on my gift. Browne was naturally gifted, the same with Paul Flynn. I don’t know where I’d be (without hurling).”

Both men share that appreciation: their paths temporarily diverged after those Waterford minor years, McGrath’s senior career never extending like Shanahan’s did: “He lived the college life, I’ll put it like that. I’ll leave your imagination run there.”

Destiny then brought them together again, and four years into their sideline relationship, that bond has only deepened – even with the presence of Shanahan’s younger brother.

“Of course it’s tough lads as in, your brother’s not starting, sometimes he is starting. It’s tough on everyone. The one thing I want to re-emphasise and the one thing I’ll always say is that because I’m there, I won’t say Maurice Shanahan has to start. We look at his form, look at every fella’s form, what way he’s playing, how he’s playing. He’s probably known at the moment as the impact sub if I’m being honest with you.

“Does he like it? No, so he doesn’t. We have no team picked for the All-Ireland, will he start? I don’t know yet. It has never affected us. We do very little talking about it at home so we don’t. My mother and father would never ask me. Of course it’s tough when you call out the team and he’s not starting but that’s sport. You have to treat everyone the same. I treat every person the same in that dressing room. We’re a close family anyway, closer than a club team.”

Not that the bond was lacking under previous managements; Justin McCarthy, Davy Fitzgerald, Gerald McCarthy. Only McGrath brings something more, a tie that was founded with his teaching and coaching role at De La Salle.

“He knew these lads from school years, teaching in De La Salle, 10 or 12, a lot of them. The club versus club thing in the east, that was nailed so it was. That’s the loyalty and respect we have for each other.”

It’s that back story, the soldiering together, which no more or no less than Galway, is what sets Sunday’s final apart.

“Do you lie in bed at night and sometimes think about it? Of course, you do and what it would be like for the people of Waterford. More for your families than anything else, for those lads’ families and what they have done to get them to college and bringing them to matches from the age of six all the way up.

“For your club too it would be fantastic and the boys it would unbelievable. They’re always on about the ‘59 team and it would be great for these lads to experience that.”

One last word about Austin Gleeson, current hurler of the year, and contender again 10 years after Shanahan: “Austin has everything. So did Ken McGrath and that’s a fair statement. He was one of the best and Austin, (22 now), and I couldn’t speak highly enough of the man, lads. His attitude on and off the field is unbelievable.

“It’s more the pressure that comes with it, that you’re expected to perform every day. That’s the pressure I put myself under. You’re expecting then ‘why can’t I go back to ‘07 when I was playing well and getting goals – what’s happening? I was 30 so I was a bit more experienced.

“Everything he’s took in his stride. He won’t get carried away by being the ambassador for this or that. He would ask Derek could he do this and could he do that, and that’s a great sign of the young fella.”