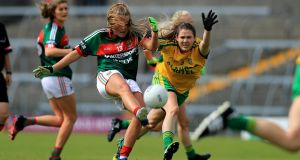 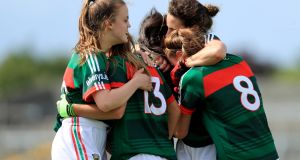 Mayo player’s celebrate at the end of the game. Photograph: Donall Farmer/Inpho

The Kelly sisters, Niamh and Grace, both found the net while top-scorer Cora Staunton also raised a green flag as Mayo sent Ulster champions and beaten Lidl Division 1 League finalists Donegal crashing out of the All-Ireland series at the quarter-final stage.

After losing the Connacht decider to Galway seven weeks ago, Mayo got their season back up and running with a facile qualifier victory over Kildare while, in contrast, a long lay-off since July 2nd seemed to hamper Donegal.

The sides were level at half-time but despite playing against the wind after the interval, Mayo had the pace, running power and goal touch to run out six-point winners.

Mayo’s inside line of Staunton, player of the match Grace Kelly and Sarah Rowe collected 2-13 between them - as Staunton led the way with a 1-6 haul.

But it was a mixed bag of an afternoon for the Carnacon superstar, who registered a number of wides, including four off-target frees.

Grace Kelly was excellent, creating the opening goal for sister Niamh before netting herself with nine minutes left.

For Donegal, it’s another case of what might have been at the quarter-final stage - and the fourth time they’ve tasted defeat at this hurdle. But on the back of a promising start, it appeared that they might be on course for a very first semi-final appearance.

Mayo knew they had to keep tabs on Donegal’s potentially lethal inside pair - captain Geraldine McLaughlin and Yvonne McMonagle - but they had a goal apiece within seven minutes.

Grace Kelly opened the scoring with a Mayo point with 28 seconds on the watch but Donegal drew first blood in a spiky encounter in the third minute.

Karen Guthrie picked out McLaughlin with a quickly-taken free and the Termon star rattled her shot past Yvonne Byrne, who would go on to enjoy a fine game for Mayo.

Donegal’s second goal opened up a 2-1 to 0-2 lead and this time it was McMonagle latching onto a long ball before squeezing a low shot past Byrne.

A McLaughlin free had Donegal ahead by six, their biggest lead of the game, but Mayo were back on terms by the 22nd minute at 0-8 to 2-2.

They were rocked by a sin-binning for Fiona Doherty midway through the first half - for an off-the-ball challenge on Eilish Ward - but the damage in that ten-minute spell was minimal.

And Donegal lost a player of their own to the sin-bin when full-back Emer Gallagher saw yellow for clashing with Staunton.

At the break, the sides were level at 2-5 to 0-11 and while Donegal scored the opening point of the second half through McMonagle, Mayo responded with a 36th minute goal from Niamh Kelly and would lead from there all the way to the finish.

Laura Gallagher, who came on to replace injured first-choice Donegal goalkeeper Aoife McColgan in the first half, did well to keep out Mayo sub Amy Dowling with her first touch but the Westerners would add two more goals before full-time.

Staunton’s, in the 44th minute, was a crucial score as she bundled the ball over the line from close range after Gallagher struggled under Niamh Kelly’s point effort that dropped short.

Grace Kelly’s goal nine minutes from time effectively ended the game as a contest and down the home straight, Mayo defended doggedly to protect their lead and advance to another semi-final.

Mayo will now meet Cork for the first time in the senior championship since the Rebelettes claimed a 2014 All-Ireland quarter-final win.