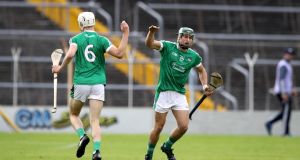 Limerick, more battle-hardened after a tough Munster campaign, finished strongly to book a place against Kilkenny in the All-Ireland Under-21 hurling final.

Galway, playing their first match of the campaign, tied the game in the final minute of regular time when Evan Niland pointed.

But that was their last score of a game where the sides were level 10 times, with Aaron Gillane edging Limerick into a lead they did not surrender, with points from Thomas Grimes, Robbie Hanley and Gillane again sealing the win.

The teams were level at the break at 1-9 to 0-12, with corner-forward Peter Casey plundering 1-2 in the opening 10 minutes for Limerick against the breeze.

Galway goalkeeper Darragh Gilligan produced a couple of good saves but he could do little to stop Barry Murphy flicking to the net five minutes after the restart after he had saved from Barry Nash.

A point directly afterwards from Nash made it 2-13 to 0-14 but senior player Conor Whelan led a Galway revival. A strong run from the Kinvara man ended with Jack Coyne shooting to the net and then 12 minutes from time Whelan burst through to fire home an excellent goal.

That made it 2-17 to 2-15 to Galway but Limerick did not panic and points from impressive sub Andrew La Touche Cosgrave and Kyle Hayes got them back on level terms. Conor Boylan and Brian Concannon exchanged points and when Nash edged Limerick back in front, sub Niland pointed a late free to level them for the tenth time.

But it was Limerick who pushed on, Gillane restoring their lead and while they were wasteful in a flurry of shots, Thomas Grimes and Robbie Hanley hit the target to put a goal between them and then Gillane landed the insurance point.

They will now hope to maintain their excellent records in finals - they have won all five - when they meet Kilkenny in three weeks time.

1 Matt Williams: Six Nations must recognise the desire for revolution outside Europe
2 Sport crosses its fingers yet again as ministerial merry-go-round gets another spin
3 Monica Seles: The warrior queen who could have been the best ever
4 Aidan O’Brien targets historic eighth Epsom Derby win with strong hand
5 Michael Walker: Ian Baraclough staying on trend, from Sligo to Windsor Park
Real news has value SUBSCRIBE