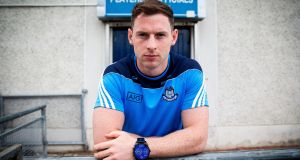 Philly McMahon: “We don’t know how well our tactics are going to work, the same with them [Tyrone] So we can only prepare as best we can.” Photograph: Gary Carr/Inpho

Philly McMahon reckons he’ll have to give the McGregor-Mayweather fight a miss early on Sunday morning.

He’s an MMA enthusiast and, but for his commitment to Dublin football, believes there’s a good chance he’d have pursued the sport much more seriously.

Owen Roddy, McGregor’s striking coach, is a close friend of McMahon’s and a fellow Ballymun man. But the 5.30am start simply won’t work with an All-Ireland semi-final against Tyrone just hours later.

McMahon, who runs two businesses as well as the Half Time Talk charity, is also moving into a new house so sleep is a precious commodity these days.

He plans to record the fight but even if he doesn’t watch it back before Sunday’s game, he feels the plot lines which play out at Croke Park will be similar to those in the ring in Las Vegas.

“I think it’s a big challenge for him, you just never know because it’s like us playing Tyrone, we don’t know how well we’re prepared for it,” said McMahon. “We don’t know how well our tactics are going to work, the same with them. So we can only prepare as best we can.

“But this fella has so much self-belief that anything can happen. He could just catch him with one shot. He’s definitely the bigger man and he definitely has freak power and freak movements.

McGregor may possess an indomitable spirit, as McMahon notes, but the 29-year-old Dublin defender is shielded by his own aura of self-confidence.

It radiates from him and is a part of his football career, much more so than his physicality or high skill set, that he prides himself on and which he has carefully invested time in.

Ask him if he will always win that battle between himself and an opposition forward and he barely pauses to consider.

McMahon’s background is well known at this stage. He witnessed many of the friends he grew up with in Ballymun spiral into drug abuse and his own brother, John, passed away in 2012 having previously battled drug addiction.

Philly himself has never drank, smoked or taken drugs and, in recent years, has managed to harness all those difficult experiences of his youth and use them for the better.

“I would use a thing called power of choice, that every time you have something negative in your head, a negative thought that you are self-assessing or particularly self-aware of, that you can actually shift that to a positive,” he said.

“The way I see it is that out of every negative thing there is an opportunity. I’ve dealt with that all my life, with my brother’s situation or people having a stigma about Ballymun. These are all little opportunities that pop up.”

The four-time All-Ireland winner made his Championship debut in 2008 but believes he is only hitting his peak now, thanks partly to that extra emphasis he has placed on his mental conditioning.

“2015 and 2016 were really good years for me,” he said. “Although a lot of people think it is a long year, it’s actually quite short. It’s six games and you win an All-Ireland. So it’s quite short when you look at it that way. I’ve only really started playing the last two years. I’m hoping this is my third year, of playing decent football and enjoying it.”

Alongside football, McMahon’s work and private life are flourishing. He is in a relationship and has nine staff working for him across his two businesses.

He lives his life as per a diary which is carefully colour coded in blue, yellow and red, representing time each day that he will devote to either football, work or his family.

Balance is the word that the corner-back keeps coming back to.

“I have actually now started to work around my family members,” he said. “So I go down to see my Dad a good bit, every day. I’d work myself around those hours, instead of going to work and then my family working around what I’m doing.

“I’m not one of these players that’s looking to get 10,000 kicks of a football a day or anything like that. At this stage of my career I’m just looking to get balance and to make sure that when I’m in different compartments of my life, whether that’s business or family relationships or my charity, that I’m there 100 per cent and living in the present.”

1 Georgia and Fiji in line to join Six Nations sides in eight-team tournament
2 Peter Byrne: A gruff exterior hid the sensitive soul and warmth of Jack Charlton
3 Keith Duggan: Bubba Wallace tweet shows just how troubled Donald Trump’s mind is
4 Mark Lawrenson: Searing honesty and a sense of being in control defined Jack Charlton
5 ‘Jack used to call me his official grasshopper keeper. We had a great time’
Real news has value SUBSCRIBE