Derek McGrath unimpressed with ‘Up for the Match’ sweeping jibe 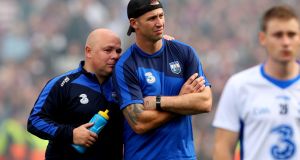 Derek McGrath hopes Waterford’s progress this season will help hurling pundits move on from their sweeper obsession and accept that the game has been constantly evolving for a long time now.

Following his team’s three-point All-Ireland semi-final defeat to Galway on Sunday, McGrath has taken issue with some of the pre-match debate. One scene in particular on Saturday night’s Up for the Match programme has proven to be one jibe too many.

“We were in Johnstown House on Saturday and I had made a decision earlier in the day that I’m not going to watch it,” McGrath explained, talking in the Burlington hotel on Monday. “Then as the day went on we were having so much craic up there we said we would.

During the RTÉ preview show, a selection of scenes were based around locals using a sweeping brush, with a group of underage players in Ferrybank GAA club filmed training with the brushes. “We’re going to sweep Galway, back to the west,” they cheered, during the short segment.

Waterford’s much-maligned defensive system, whereby Tadhg De Búrca drops back as a ‘sweeper’ in front of the Deise full back line, has been one of the major talking points throughout the summer.

“It’s been a common trend of debate all along. It’s just about how you look at it. Jimmy McGuinness always says; it’s how you look at the game. There’s something in that.

“I keep saying it, it’s more deliberate with Tadhg (De Búrca’s role) but I still have the 1992 and 1993 final in my mind with Pat O’Neill sitting back there for Kilkenny. I still have Keady in the 1990 final, God be merciful to him, on Tomás Mulcahy in the first half especially. I have Brian Hogan, I have...this year when Walter Walsh wasn’t followed down the field by Declan Hannon, I’ve Declan Hannon sitting at the edge of one D and Cillian Buckley sitting at the edge of the other D.

“All the narratives that are there as opposed to the sweeper system. Even the language of commentators when they are talking, it’s the Waterford sweeper but when it’s the language of someone else it’s the extra midfielder, it’s the man helping back. That’s only kind of irksome rather than something that’s in my mind for a long time.

“We’d like to think we’re the ones making the most informed decisions because we’re working on it. We believed in what we were doing and the lads believed in it as well.

“My mother had taped Donal Óg the day of the Cork game and he’d been very complimentary of the team and what they’d done. I watched him on The Sunday Game when he was on it and I felt he was very incisive in terms of showing what’s happened. He’s missed there.”

With a night’s sleep under his belt, McGrath – who has a year left on his term as manager – says he has still yet to consider his own future, but the goodwill his team received on Sunday night has helped ease the abject disappointment.

“There was a sense we died with our boots on, so that was the feeling. We didn’t go to bed happy, obviously we were massively disappointed, but we felt we were really well supported. The disappointment was helped by the amount of good will last night.”