If we split the Dubs into two teams, who gets into Coppers for free?

Sideline Cut: The All-Ireland relies on the pull of home. Anything else is daft 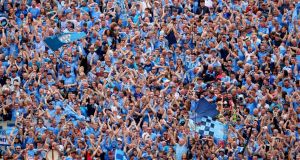 Dublin supporters should be spitting mad at the mere idea. Since last Sunday the calls to cleave the county – or, more accurately, the luminous city – into two distinct football teams, and thereby halve their potential to reap destruction upon the championship, have grown louder.

It won’t work. It can’t happen.

The reaction is understandable. It wasn’t so much the scoreline that spooked the nation during the humbling of Tyrone. It was the silence. Dublin games are supposed to mean noise, but after the ebullience of Con O’Callaghan’s fifth-minute goal a sort of collective understanding that the outcome was irrevocably tilted in Dublin’s favour seemed to settle on the crowd.

The Ulstermen fell into a deeply defensive formation even though they were five, six and seven points down, determined to hold on to what they hadn’t got

After that Croke Park was autumnal – beautiful and quiet as a graveyard for sections of the match. Tyrone as a GAA county has made an art out of feistiness but became disconcertingly quiet when it was obvious that their team’s defensive tactic was powerless against the endlessly patient embroidery of Dublin’s attacking game.

The Ulstermen fell into a deeply defensive formation even though they were five, six and seven points down, determined to hold on to what they hadn’t got.

The Dubs punted the ball around the unoccupied swathes with a casual deliberateness that screamed a message to the opposition and to other teams. The overview made a mockery of the defensive shape, and the periodic Dublin raids through the mass of white shirts offered a definitive proof that Dublin circa 2017 can simply football their way through any packed defence: that they can score at will.

The Dublin of two or three seasons ago might have cut loose in the second half, goal-seeking to please the audience. But not this team. Hauteur is their new persona. They had two wides on Sunday. One was just a miskick from Niall Scully; the other was a blazed effort from Jack McCaffrey when he was bearing down on goal.

The cavalier, shoot-at-will Dublin have disappeared. They have eliminated speculative shots from their game. That poise and deliberation deepens the growing sense of despair around the country. The sight of Bernard Brogan unused on the bench was like an advertisement of the options that Jim Gavin has at his disposal.

There is a tendency to think of “this” Dublin team as the side that won their guerrilla-raid All-Ireland on the back of Kevin Nolan’s terrific point in 2011. That, of course, is misleading. This is a new team in both personnel and approach.

Tyrone were billed as the boys most likely to stall Dublin. They had the strategy, the athleticism and the chutzpah

And although Mickey Harte didn’t encourage it, Tyrone were billed as the boys most likely to stall Dublin. They had the strategy, the athleticism and the chutzpah. It wasn’t hard to gauge, even watching from a distance, how hard they had worked since their Ulster championship defeat by Donegal in 2015. They became bigger, faster, mean, rigorously organised. They strolled through the northern province this summer, and few predicted they would dissolve against Dublin, the team they have waited to play two full years.

Harte struck a note of optimism afterwards and said the right things about Dublin. The internal review of what happened to Tyrone in those 70 minutes will remain internal. But it’s clear that something wasn’t functioning. Tyrone were inexplicably meek and compliant, and not even the sustained torture of watching Ciarán Kilkenny and company essentially taunting them with the ball could provoke a show of constructive malice or anger. For the first time in Mickey Harte’s long reign a Tyrone team accepted their fate.

And that frightens people. Tyrone are considered to be one of the evergreen football counties, with the resources, tradition and structures to perpetually challenge for titles. In March and April the consensus was that a handful of teams – maybe seven or eight – had moved into an elite tier above the others. By the end of a brilliant league final between Kerry and Dublin it was easy to imagine thrilling future instalments of the most sacred rivalry in Gaelic games.

Memories of raucous Meath teams bundling into the city to lay waste have become nostalgia. The province has been settled. And where Leinster goes all of Ireland could follow

But by last Sunday the fear was that Dublin had moved beyond the reach of all the others. Tomás Ó Sé’s dire prediction that, rather than a Dublin three in a row, he would worry about the Dubs going on for six was not just a klaxon call to arms to his Kerry team-mates. If anything it was the most logical predication. Leinster has, after all, essentially fallen: memories of raucous Meath teams bundling into the city to lay waste have become nostalgia. The province has been settled. And where Leinster goes all of Ireland could follow.

But is that necessarily true? When Tyrone came out after half-time they missed four scoring chances that would have cut the gap to three points. And it may be true that Dublin simply switched into another gear and eased into a greater advantage. Who knows? But even when playing miserably Tyrone had a chance of still being in the game with 20 minutes to go.

Who knows whether Dublin’s seeming invincibility will begin to decline with the freakish powers of Stephen Cluxton? And who knows if this remodelled young team will win even this All-Ireland, let alone push on for six in a row? For the bet right here and right now is that if it does go down to the wire against Mayo, Dublin will, in the end, turn to Bernard Brogan to ask him to go and win it for them, as he has in the past.

Conversely, if Mayo can somehow complete this mad, beautiful mission of theirs it doesn’t mean that Gaelic football has been saved either. No, most of the worst fears of observers from outside the city are probably true. Dublin look set to be either the outright favourite or among the favourites for every All-Ireland for the next 10 years. And it’s impossible to gauge what effect a decade of Dublin supremacy will have on other counties. It’s impossible to say it won’t weaken the roots or the national interest.

It’s ridiculous to ask Dublin GAA fans to follow half their county. And which side gets to wear the blue?

That’s an issue for the GAA. The regeneration of the city game, which the association instigated, has been spectacularly – and ominously – successful. It’s the other 31 they need to worry about now.

But the rules can’t change for Dublin. The magnetic attraction of the All-Ireland championship is based on the mysterious pull of home, of following your county. It’s ridiculous to ask Dublin GAA fans to follow half their county. If a guy born in Dublin North and living in Dublin South – not a broad Venn diagram – goes along to see those teams play each other in some future semi-final, who is he supposed to support? Which side gets to wear the blue? Would Dublin North get free into Coppers? In reality, who actually loses in what would be a glorified version of the annual Dublin Blues game?

No, splitting the city is a daftness, a desperate measure for supposedly desperate times. Dublin may be out of control. But that’s not Dublin’s problem.