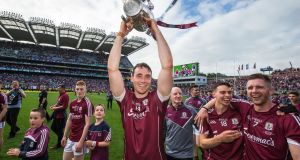 The most expensive sheep in Ireland, worth an almighty €15,000, made an appearance on The Late Late Show on Friday night, his owner telling us that he’d named him Heart of Gold because he’s a Neil Young fan (the owner, not the sheep). And that he was responsible for over 100 ewes on the farm currently being in an expectant state. A bit like rust, Heart of Gold evidently never sleeps.

What was most unique about this sheep, though, was that he was the only one to appear on our screens all week that hadn’t been painted maroon or blue and white. Yes, it was that time of year again, an All-Ireland final was upon us, so annual thoughts go out to any of you who had to explain to visitors why we mark these special occasions by giving our sheep a multi-coloured matt finish.

If the sheep weren’t too excited about it all, the humans certainly were. With Galway and Waterford having waited a combined 87 years for All-Ireland success Up For The Match was predictable raucous, with no need whatsoever for Dessie and Grainne to whip the audience in to a frenzy because they were already in that very state when the programmed started. And John Mullane talking about buck-naked horse-riding only sent them over the edge.

A particular highlight was Deise man Jim Beglin recalling a congratulatory text message from RTE’s Tony O’Donoghue, on a break from having Martin O’Neill bite the face off him, after Waterford won the semi-final. “Up the Denise!” it read. Auto-correct is a curse. And then there was Teresa Mannion advising the people of Waterford not to make “unnecessary journeys”. There was possibly a storm of complaints about that one.

On to Sunday and our panel of Ger Loughnane, Liam Sheedy and Henry Shefflin were able to speak very, very knowingly about what it takes to win an All-Ireland, Ger and Liam biting their respective lips when Henry said you need “hurt” to drive you on, neither man able to recall all that many occasions when he might have experienced it.

Ger reckoned that to prevail you needed to go in a final “like Sean Connery in that film when he said ‘if they put one of ours in hospital, we put one of theirs in the morgue’.” “Now I don’t mean that literally,” he added, lest he thought he was untouchable when it came to the incitement to violence laws.

Over to the commentary box and who was it but Marty Morrissey, making his All-Ireland telly debut. After last year’s high praise we anticipated another soliloquy, and he didn’t let us down, although at one point it looked like the start of the match would have to be delayed while he completed it. There was a post match soliloquy too, so between the two everyone from Eamon de Valera to Conor McGregor, from Cu Chulainn to Ban Gardai, got a mention, although some of us were at a loss when we were told we were about to witness “history with a capital D”.

After Galway’s start, as it happened, Waterford’s All-Ireland hopes looked like Distory, but they woke from their slumber and by half-time the lads up in the studio were checking the replay date. Breathless, lovely stuff.

The second half was a bit useful too, Marty prompted to add Michael Flatley to the day’s name-checks when he suggested Joe Canning had superior dancing feet. And with the assistance of those feet, amongst others, Galway edged away, and come the final whistle Marty was off again, RTE likely close to summoning the St John’s Ambulance folk to sedate him.

Over on the Six O’Clock News, RTÉ had a word with a bunch of supporters leaving Croke Park.

“Very sad. I won’t see another All-Ireland, I’d say,” said a Waterford woman who was in desperate need of a pick-me-up in a local hostelry.

Mind you, the next fella was no chirpier. And he was a Galwegian. “It’s hard enough to get over-excited about it, it was that type of game, but it was nice to get the win in the end.”

And off he went.

There’s no pleasing some. Just think how Denise feels.