Jim McGuinness: How to close the Gaelic football gap 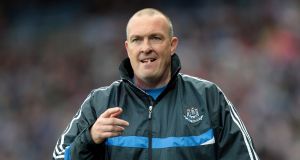 Pat Gilroy: It was under his watch that Dublin began to run the senior football team as a business. Photograph: Cathal Noonan/Inpho

There has been a lot of talk this summer about ‘the gap’ between the few elite Gaelic football counties and the rest.

The way Dublin dismantled Tyrone led to several calls to divide the city into two distinct entities. I feel that would be completely wrong. The entire tradition of Gaelic games is based on an emotional attachment to place as much as to the team. It doesn’t make sense to effectively punish Dublin for doing what was demanded of them for years. They are simply getting the best out of the resources available to them. And they are here to stay.

What are the implications of this?

Imagine what the Gaelic football landscape will be like in a decade’s time. My best guess is that it won’t change much. Dublin will be the standard bearers and the other strong counties will respond. Kerry will keep pace with them. Tyrone have been there since 2003. Mayo have been consistent. Cork will get their act together. But it is a bit of a private members’ club.

So where does that leave the other counties? That’s where the conversation needs to turn now.

I remember heading down to Leitrim with the Donegal lads for a few training weekends. Years before I was asked to come in and do some coaching with Cloone, a small rural club. We won the Intermediate championship and it was hugely enjoyable. You didn’t need to spend long there to understand that this was a proper football county.

When I was there with Donegal, the few pubs we were in carried photographs of their local championship-winning teams and, of course, of the 1994 Connacht championship-winning side. You’d meet people and they were engaged, curious about what Donegal were up to and passionate about the sport.

But Leitrim has 25,000 people while Dublin has 1.4 million. Their entire sponsorship budget is probably worth as much as a single sponsored car. On Sunday week, the chances are that an eight-year-old in Drumshanbo and an eight-year-old in Drumcondra will watch the All-Ireland football final on television. Both may be thrilled and inspired by what they see. Both may wonder what it is like to play for their county in Croke Park. So why should the GAA give one child a better chance of achieving this than the other?

That’s the reality for Leitrim right now. What can they and counties like them do to change their circumstances? Dublin North and Dublin South is not the answer to Leitrim flourishing. There needs to be both an internal and external intervention.

The first thing you need to do is to give the people and the players hope. You need to give them the belief that there is the potential to achieve something. This idea of: We are developing. We are getting better. We are moving forward. That happens too seldom. In order to do that, I believe Leitrim and the vast majority of counties need guidance that can only come from a programme delivered by the GAA at national level designed to ensure uniform quality of coaching and support.

It was very interesting to listen to the conversations around the world athletics championships, where the correlation between funding and medals is made all the time. How does that work?

When I was in college in Liverpool around 2004, the whole talk was about London 2012. Jobs; strength and conditioning; psychologists funding, resources, development, athletes; these were the buzz words. Huge money was going into the Great Britain team in the expectation that the expertise would raise the standard across a variety of sports. And that is what happened. Investment yielded results.

The GAA, it seems to me, is run on two distinct tiers. There is the national GAA organisation. Then there are 33 affiliated but essentially independent republics called county boards. In order for the majority of the chasing counties – the other 25 or 26 counties – to improve, there has to be honesty of effort at county board level and a desire to get behind the vision for their county sides.

There needs to be an acceptance that there is a required level of preparation implemented across the country. That involves schools projects, sports science, strength and conditioning and expert coaching in all the counties. If that sounds like a professional structure imposed on an amateur ethos, well, let’s stop kidding ourselves. That is happening anyway. Let’s be honest about it.

It is only in the weak counties or, to be more accurate, the underfunded counties that don’t get that standard of training. There is a right way to develop the best young players in any county. Dublin know this. The teenager in Leitrim needs and deserves the same strength and conditioning and dietary advice and coaching as the kid in Dublin or Kerry. They need to be shown how to improve their skills by coaches who have the background and knowledge.

There are people who play golf all their lives and never really improve. Why is that? Because they aren’t being developed and because they keep doing the same things wrong. That liability is there all the time when the expertise is not applied. So if you want a kid to be the best he or she can be, then give them the best support to achieve that.

The gap won’t close on its own.

So who is going to instigate the change? There has to be an intervention at centralised GAA level to ensure that the standards rise at a national level. And maybe the response to this is that every county has dedicated football coaches as it stands. That’s fine and I am sure they are doing terrific work. But there is no balance across all counties. I would suggest that this is not a high performance structure or culture.

Tyrone, for example, is a different kettle of fish. They have their own independent coaching culture. They have just won the inaugural U-17 All-Ireland title. That’s no surprise. They are a good example of a county that has not gone away because they have raised internal standards.

It was under Pat Gilroy’s watch that Dublin began to run the senior team as a business. How do other counties replicate that? The obvious answer is: we can’t. We don’t have the numbers or the resources.

I feel that there almost has to be an acceptance at central level that the county boards do have not the capacity and in many cases the will to change this sense of resignation. I feel this is a big part of the problem. It is staring us in the face.

In many cases, county board officers are trying their best. There are good people working hard and struggling just to keep the show running at club and under age level. I understand that. They don’t have the time to launch themselves into it.

What Dublin did over the past seven or eight years simply proves that this type of process – heavily-funded orchestrated coaching – works and yields results. That should be viewed as a positive. That should encourage the GAA to start investing in the other counties so that the vast majority don’t feel as if they are there to make up the numbers.

My sense is that a lot of universities are at a higher standard of support processes than a lot of senior county set-ups. They have the facilities, the players are on campus, they have the sports science expertise, they have coaches at hand. They are getting the best of everything. But the colleges’ competition is not one which attracts mass interest and passion.

That’s the All-Ireland. It goes back to hope and emotional attachment. We can’t have a situation where the majority of the counties just feel that being competitive is almost an impossible task and a lost cause. To me, that makes no sense.

I, for one, don’t believe that any cause is lost. Dublin are the barometer. Go chase them. It is not an easy proposition and would take a huge injection of energy and belief allied to a clear vision and the help of the GAA.

The Dublin machine is moving very smoothly at the minute. But that’s because there are people in the city working hard to ensure that’s the case. It is all streamlined. They are winning the battle every day on the ground.

Gaining ground won’t happen overnight. But it doesn’t have to. If there is a will to change the prevailing circumstances and a desire to improve rather than to simply exist, then the playing field can become more even.

And in ten years’ time, Dublin will still have the advantage of population over counties like Leitrim. But if it can at least be said that those notional eight-year-olds have had the same chance to learn and excel at the game, then they will respond to that and I believe the results in many counties could be revolutionary and exciting.