Founded in 1939, MMI in Bluebell, Dublin makes medals, seals, military insignia and sporting awards. One of the items they create that they are most proud of are the GAA All-Ireland hurling and football championship medals. Video: Bryan O'Brien 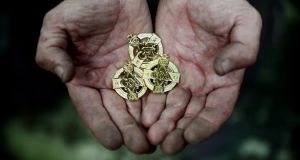 Three gold GAA All-Ireland hurling winners’ medals, crafted by hand in Bluebell, Dublin, are held by MMI employee Paul Fox. The company, established in 1939, makes medals, government seals, military insignia and sporting awards and trophies. While the Liam MacCarthy and Sam Maguire cups are returned every year, the members of the winning hurling and football panels get to keep the medals. Photograph: Bryan O’Brien

History can have the effect of freezing you in its headlights. Sunday brings us a GAA All-Ireland hurling final unique and intriguing. It should be like Paris after the liberation, the first time in over 20 years that none of the game’s traditional rulers are present for the September finale – possibly the last of its kind with a new calendar being trialled for the next three years.

That is, however, to misunderstand what the championship is actually about. An All-Ireland final is the climax of every season. When the record books are dusty it’s all very well to organise particular years into patterns and eras but close up, finals are just the means of winning Liam MacCarthy.

The absence of Cork, and particularly Tipperary and Kilkenny, crystallises Sunday’s match into what is for both sides – an eminently attainable means towards a long-desired end.

That immediacy can have a chilling effect. Both Galway and Waterford know their own histories – four and two titles, respectively – and understand only too well that this opportunity is rare. Since last winning the title in 1988, Galway have lost six finals, three to Kilkenny, two to Cork and one to Tipp; in Waterford’s case the two lost finals since 1959 were both against Kilkenny.

That history won’t be dwelled on, no more than the strange record between the counties, which reads 10-0 in Waterford’s favour – a sequence so sustained in its unwavering trajectory through the years and decades that it can’t be rationally explained – because in the here and now two well-matched teams will contest the title.

They neither need nor see the relevance in the crutch or the threat of the past.

Kilkenny, with its frontier rivalry and guarantee of underdog status, isn’t the target here and Waterford rightly feel closer to the Grail than at any time since 1963 when narrowly beaten by their neighbours

On a micro-level, Galway have been to two finals (and a replay) in the past five years and have that useful knowledge of how the day’s rhythms pulse and any small lessons of how best to deal with the occasion.

Within the counties, public outpourings have been more restrained. In Galway’s case this is because they have been there so recently and in Waterford’s because it’s not such a novelty after the – admittedly bracing – experience of 2008 and it’s all but 70 years since they last played anyone but Kilkenny in the final.

Kilkenny, with its frontier rivalry and guarantee of underdog status, isn’t the target here and Waterford rightly feel closer to the Grail than at any time since 1963 when narrowly beaten by their neighbours.

Galway are the current league holders and that crushing dismissal of All-Ireland champions Tipperary nearly five months ago has meant that Micheál Donoghue’s team have been front-running favourites all summer, a burden they carried lightly up until their re-match with Tipp and its drastically reduced margins.

Their equilibrium has been duly noted in the redundancy of questioning which Galway team will show up and the observation of a team with individual talent but collective responsibility, most often expressed in the downsizing of the dependency on Joe Canning.

Yet, in the semi-final when they did depend on him, he was there, which is probably more a matter of reassurance than concern.

Introduced to the championship at the semi-finals stage, an outsider might feel that there was better reason for Waterford to be favourites, such was the calm management of the gameplan and its ruthless execution after Cork had lost full back Damien Cahalane to a red card – a final quarter during which they outscored the Munster champions by 3-8 to 0-5.

Derek McGrath’s team showcased all of their potential in those 20 minutes or so. Jamie Barron’s timing, speed and finishing brought two goals, the first of which was effectively the game-breaker, created by a deft skill from Austin Gleeson’s infinite repertoire.

The Mount Sion prodigy attracted attention for the wrong reasons in the aftermath of the semi-final – and was touched by fate to escape the consequences – but even when the match was going quietly for him, his ability to dispossess could be seen. That was key to his mugging of Christopher Joyce, just as the vision to pick out Barron made sure the outcome was a goal rather than a point.

A stretched Cork defence would be caught out twice more in ways that – whatever your view of how Waterford might look more closely at what Noel McGrath did to Gearóid McInerney initially rather than what McInerney did to Bonner Maher in the second half – it’s impossible to imagine happening to Galway without injury or another red card.

Centrefield will be the canary in the mine. If David Burke and Johnny Coen are as uncharacteristically out of sorts or at least short of their best as they were in the semi-final it will be a huge boost to the men in blue and white

Waterford’s sweeper defence is expected to be back in full swing with the return of Tadhg de Búrca, although Darragh Fives replaced him more easily than it may prove to cover for the man-marking deficit left by Conor Gleeson’s suspension.

It may not make a huge difference in that Galway have looked at least as if not more comfortable with Aidan Harte as the spare man in a six-against-five defence as with an orthodox man-to-man formation.

The system can bottle up the Galway attack for a while but with so many physical ball-winners and long-range shooters – Conor Whelan, Conor Cooney, Canning and Joseph Cooney – they will fancy their chances of picking and landing their shots, especially once the forwards get moving and switching and probing for openings – pressurising defenders as individuals rather than as a collective.

Centrefield will be the canary in the mine. If David Burke and Johnny Coen are as uncharacteristically out of sorts or at least short of their best as they were in the semi-final it will be a huge boost to the in-form Kevin Moran and Barron and the pendulum of the match will swing towards blue and white.

There is, however, a plausible justification for the Tipperary match causing such apprehension for Galway: its perennial narrow margins and the inviting prospect of inexperienced final opponents. That might appear presumptuous but a heightened sense of fear when facing the champions is understandable.

What’s more, with higher-yield forwards and a strong defence, Galway’s centrefield need only contain to achieve its task. Of course there are dangers: Waterford, primarily through Gleeson, still have the power to surprise and their bench goes up the gears rather than idling towards the whistle.

But Galway haven’t wandered off course all summer despite the mounting pressure of expectation. History beckons for both counties but it can only be created in the present. Right now, the present is Galway’s.