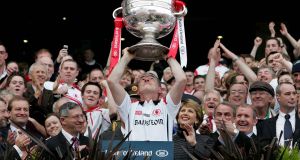 In the end there was a kind of symmetry in the way Mickey Harte headed over the horizon in this, the very year that football reverted to pure knockout. The brutal dictates of the format saw his team out of the championship after just one match, a defeat by Donegal.

The lack of an All-Ireland qualifier system deprived Harte of the weapon he had wielded to enormous effect down the years: two of his three All-Irelands, the 2018 final and three of five further semi-final appearances all came having lost a match in Ulster. This year, there would be no ‘get out of jail’ card.

In his extensive interview with Declan Bogue in Saturday’s ‘Irish Examiner’, the now outgoing Tyrone manager made the point that as 2020 had been beset by lockdowns and rescheduling he simply felt he’d like a final year unencumbered by such distractions.

There had also been some promising additions to the panel. Conor McKenna exhibited such aptitude on his return from the AFL that he was named GAA-GPA Footballer of the month for October after two matches back with Tyrone and then there was the long-anticipated emergence of Darragh Canavan, Peter’s son.

In other words, Harte was looking for a normal year with an attack that promised for the first time in age to be able to punch way beyond the norm.

The county board though had evidently decided the time had come. More significantly there were suggestions that the players might also welcome a new voice in the dressingroom.

McKenna himself sounded an equivocal note when interviewed earlier this month and asked did he want the manager to stay, pleading his recent arrival in the set-up.

“It’s a bit different for me, I’ve only been there for probably three months, so it’s hard for me to say. I had a strange year. Nothing was probably normal compared to what those boys have been through.

“It’s probably more the players’ decision and the coaches and the ones who have been there for the last five or six years, they know what’s going on and they know what’s better for the team so if they think Mickey is the man to stay on then that’s more than welcome for me.”

Harte leaves with a major body of achievement. His work with underage teams in the 1990s and early 2000s brought unprecedented success to the county, which he followed up with three senior All-Irelands. He was at the top of a high-performance county, which was - and still is - producing good players and was resourced by a dynamic support group in Club Tyrone.

But he was the one who made it happen on the field. His instincts and innovations made the county a force. And he had the materials.

In Newbridge back in May 1991 Tyrone inflicted on Kerry a record All-Ireland under-21 final defeat, 4-16 to 1-5, in what was the county’s first success in the grade. A number of the players would take the county to the 1995 All-Ireland final, narrowly lost to Dublin, and Peter Canavan would captain the breakthrough team of 2003.

Harte’s own underage successes with minors and under-21s in the decade that followed fuelled the senior achievements that would follow.

In his first year, Tyrone caught the eye from an early stage. A league win in Killarney in April 2003 prefigured what would happen in the famous All-Ireland semi-final four months later. Kerry had no answer in the first-half to the mobility of Seán Cavanagh at centrefield whereas Eoin Mulligan’s movement also caused untold problems.

Memories of the semi-final have been dominated by the ‘puke football’ designation and stricken Kerry players, likes stags at bay surrounded by hounds, but the fact was that Tyrone played them off the pitch and were forced to retrench when Canavan got injured.

There had already in that championship been a significant illustration of Harte’s most striking ability - the thinking through of problems on the field and in-game management.

Extremely lucky to survive a nine-point deficit against Down in the drawn Ulster final, Tyrone fielded for the replay with the late Cormac McAnallen, who had always been a central figure on teams, relocated to fullback to counter Down’s aerial strength. Harte had found the remaining piece in the jigsaw that when completed, would win the All-Ireland.

His interesting ideas after that triumph emphasised not playing challenge matches, contesting everything - Tyrone also won the league that year- and prioritising individual training to cut down on the hours involved.

The second All-Ireland in 2005 was schemed at half-time in the quarter-final against Dublin when trailing by five points. Players were switched - Enda McGinley from attack to centrefield, Conor Gormley back from the middle to centre back. Joe McMahon also weighed in at centrefield to defuse Ciarán Whelan’s influence.

These changes revived the team’s challenge to the extent that it went all the way. Having received the Philips Manager of the Year award in 2005, Harte pin-pointed the fulcrum of the year as the Dublin match.

“I think it was a time that taught us a whole lot about Gaelic games really because often you would have heard it said it’s a great time to get a goal just before half-time.

“In fact we learned it’s a great time to concede a goal because if we had gone in two points down we might not have addressed the difficulties we were experiencing as much as we did when we were five down.

“Taking drastic action helped us redefine and reshape our team and we didn’t look back after that.”

There were no more All-Irelands after 2008 but to a striking extent, Harte kept Tyrone the most successful side in Ulster. In nine of his 18 years, and regardless of whether they won Ulster, the county outlasted all others from the province in the championship, including in the previous three years to this season.

There had though been growing reservations about the style of play and what was seen as an excessive negativity - almost that players had to fit the manager’s system rather than vice versa. He would argue that he always cut cloth to measure.

If there was a downside to the calm control and ability to analyse, react and change on the sideline it was a headstrong nature and a single-minded refusal to back down.

The early controversy that convulsed his club career long before he was a household name and led to the formation of Harte’s - and Canavan’s - club Errigal Ciaráin owed much to those traits.

When he boldly stated in 2007 that he would field a team regardless of any refusal by GPA members to play inter-county football, Tyrone chair Pat Darcy was sufficiently alarmed to speak out a few days later.

“It may not be wise to attempt fielding substitute teams. Not all county committees and county managers may agree and even if they did, substitute players may be open to vilification and ridicule from striking colleagues. Splits may emerge in clubs and counties between players on strike and colleagues who play. Such a scenario could tear the GAA apart and should be avoided at all costs.”

At the core of all of this is Harte’s deep-rooted faith. It has sustained him through terrible events. The death of players Paul McGirr, a 1997 minor, and Cormac McAnallen, newly appointed captain of the All-Ireland champions in early 2004, brought intense loss to him and the county.

That this should be followed in 2011 by the murder on honeymoon of his only daughter Michaela with whom he had such a strong bond, in which football played its part, was for the world at large so viscerally shocking as to be literally insupportable.

In this weekend’s interview with Declan Bogue, he explains how he coped with this seismic bereavement.

“No, no I didn’t, thanks be to God. I never needed counselling. I am just so blessed. I feel that the grace of God has been given to me along with the challenges, I have been given the grace to deal with it.”

Fortified by this extraordinary faith he was unsurprisingly not inclined to entertain doubts on matters such as tactics, how to select a team and sundry other football matters.

Mickey Harte leaves in the darkness of winter, 18 years to the day since he was appointed to the Tyrone position. There is always some turbulence in such sundering but when posterity settles it will frame someone who gave so much to his county, suffered so much in life but also achieved so much.