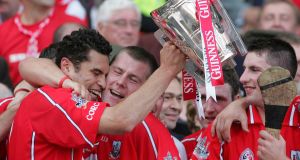 It falls today, predictably without too much fanfare, but it is now 15 years since Cork last won the All-Ireland hurling title. Having survived a slight frisson against Galway in the 2005 final, the county ultimately recorded back-to-back titles for the first time since 1978.

Few would have imagined that at least a decade and a half would pass without the county seeing Liam MacCarthy again. By this stage Cork hurling is just one year short of its record dry spell of 16 years, set between 1903 and 1919. Even the fabled 12-year famine that ended in 1966 has been eclipsed.

John Allen was the manager in 2005, having stepped up to take over the reigning champions when Dónal O’Grady called it a day. Apart from a successful cameo with Limerick, winning a Munster title in 2013, he has had hardly any involvement in the game as manager, but from a distance reflects on what befell the county after the 2005 win.

“So much happened in the immediate aftermath of 2005 when you had a number of strikes, a lot of uncertainty and a lot of unfriendliness going on outside of the playing field and it divided an awful lot of people. From 2007 to 2013 there was a bit of a tug going on all the time between the board and the players. And that didn’t help.”

He doesn’t, however, want the difficulties of what followed to overshadow the players’ achievements in progressing from the rubble of their first strike in late 2002 to reach the next four All-Ireland hurling finals, winning two.

“They had won two U-21 All-Irelands and fought a very divisive battle with the boardroom, but came through to put their sporting selves where their collective mouth had been and did deliver on the field. That created enormous hype around the team when they did get to four finals.

“So much has happened between ’05 and now that it seems so long ago.”

Allen is keen to emphasise that the battle to assert themselves before being overtaken by Brian Cody’s rising Kilkenny in 2006 wasn’t just a tale of grim struggle.

“It does feel like a generation ago given the excitement of that time in Cork when we reached four All-Ireland finals in a row and there was huge interest in the county in tickets and children’s days – jeez, there must have been thousands of them, particularly the first year [2003] when Setanta Ó hAilpín was involved.

“It was like Justin Bieber being down in the Park. Literally we nearly needed security to get him off the field one of the nights. There was this sort of excitement there between 2003 and ’06.”

The team’s line on the graph crossed Kilkenny’s in that final year. A potential three-in-a-row for Cork became the starting point for what nearly turned out to be five for Kilkenny.

Although the previous years had been intense, Allen doesn’t believe that defeat in what was to be his final match in charge of Cork was the result of fatigue.

“It was a long process, going from the dispute in 2002 up until losing to Kilkenny in ’06 – and being well beaten. There had been a huge amount happening but also a whole lot of positives. I don’t know that we were tired.

“I remember being down in Inchydoney the previous weekend and we played an A v B game and the quality of it was outstanding and I just couldn’t see us being beaten. JJ Delaney [Kilkenny’s All-Star defender] was injured and we were in good shape. I don’t think you could put it down to tiredness, there was such buoyancy there.

“Kilkenny proved many times afterwards that they could come up with plans to stop another team and always had the ability to come up with something different in a replay. They did it with us by stopping our runners and we weren’t ready for it.”

He remains sad about how fractious everything became in his absence and the decision not to persevere with Ger Cunningham and the remainder of his management team. The friction with the county board led to further strikes, and the intervention of the then new GAA chief executive Páraic Duffy and the best-known industrial relations mediator in the country, Kieran Mulvey.

Allen is also unhappy at the serrated attitudes towards those players – who he describes as “very good, wholesome people” – from some in the county, agreeing that this pains him.

“It does because anyone who worked with them . . . Dónal Óg [Cusack], who was the strongest character in that group, if I wanted someone in my backroom team who I know would give 100 per cent, it would be him.”

Cusack has combined with former team-mates Seán Óg Ó hAilpín, Tom Kenny and Kieran Murphy to take a first step on the ladder of management in Cork.

“They’re working with the minors now and I hear only good things back from parents involved. Seán Óg is another who gets bad press from time to time but he’s a special guy, a decent, lovely man who’s good with young people and does anything he’s asked, like presenting medals and visiting people. It galls me to hear the things said about them by people who don’t know them at all.”

In Allen’s view, the growth of a toxic social media environment has made it challenging for people taking such public roles.

“Nobody would be involved in anything were they to take it too seriously.”