Access to facilities top of agenda for returning intercounty teams 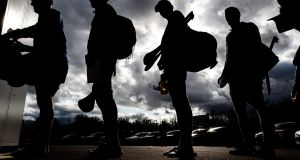 The GAA will be finalising details over the coming two days to facilitate the return of the intercounty game from next week. It is expected that county teams will have access to their own facilities, which will come as a massive relief for managements currently planning the resumption of training from Monday 14th.

Just last week, intercounty fixtures were formally accepted as part of the elite sporting exemptions, allowing players to gather in dressingrooms and gyms, as they prepare for championship at the end of October.

That being the case, Friday’s meeting of the GAA’s management committee will be determining the final version of the ‘Return to Play’ protocols specific to counties. Central Council will then sign off on them on Saturday.

Much of the experience from the club activities of the past two months will be of use with questionnaires and declarations on the health of players but there had been growing apprehension about the accommodation of teams under the summer guidelines, which saw everyone involved arrive togged out and depart immediately afterwards.

Obviously in the coming weeks the evenings will draw in and temperatures drop along with a greater likelihood of wet weather. In those circumstances the current rules which allow no access to dressingroom facilities would become extremely problematic.

In the past week, intercounty players have protested at the situation in advance of the return to play.

One manager had been looking into availing of a commercial gym and on top of the cost of access, had been put on notice by a medical consultant, who had volunteered to advise on the suitability of the premises, that a deep clean would be needed both before and after the players had trained.

Other issues that had arisen included the work of physiotherapists, content in the balmy conditions of club fixtures to put up a treatment bench on the side of the pitch, but which would require indoor facilities during the winter.

Another involved looking for hotels on the way home for players, who live in different parts of the country, needing a shower and a meal before heading home, as their family home might not be geographically convenient for the return journey.

It is anticipated that the revised protocols will lay out the formal requirements for social distancing and safe occupation of GAA premises but it will apply only to county panels.

Other matters that require resolution before Croke Park finalises its plans for the coming season are money and attendances.

The GAA is currently discussing the issue of funding for teams playing in the intercounty championship. Given the apparently strong political desire for the season to go ahead at the end of what continues to be a very difficult year for the country, it is expected that agreement will be reached without too much difficulty.

Attendances have become a significant irritant for the GAA since the Government put all fixtures behind closed doors despite the anomaly that spectators can watch indoors in pubs and hotels but not out in the open air at a venue.

For instance the Leinster colleges’ football finals in July were staged under the old permitted limit of 200 spectators, including players and officials, but the provincial council live streaming was accessed by around 6,000 viewers and one licensed premises was offering a special lunch and screening of the action.

GAA officials aren’t confident that the restrictions will be lifted in time for the season’s opening in mid-October, particularly in the light of rising infection rates, but are resigned to proceeding with the limits in place and are operating on that basis.

In the longer run, however, there is a belief among other officials that attendance restrictions must surely be revisited if the so-called wet pubs are to reopen the week after next.

The situation in Northern Ireland is already different with 400 allowed to attend matches and that will apply to Ulster championship matches, not scheduled for south of the border, like the Cavan-Monaghan fixture.

Provincial chief executive Brian McAvoy told The Irish Times earlier this week that Ulster is open to any increase in permitted attendance numbers that may be authorised in the jurisdiction.