After winning a county hurling title with his club, Malone is back on the football beat 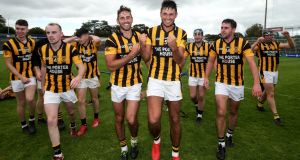 So, what’s it like to win the first men’s senior county championship in what can only be defined as the new normal? Wexford hurling champions Shelmaliers defeated Naomh Éanna just over two weeks ago in a hard-worked final.

Glen Malone relayed the stories by phone, still beaming from his side’s conquest.

“When that final whistle went, you’re so happy in that moment, that first few seconds you’re so happy, you’re hugging everybody. You just want the crowd to run in as well. That’s the little thing you’re missing. There are only so many players you could hug.

“Those are little things you missed out on, and then up the captain went to lift the cup. He was just on his own, and we were just down the front on our own on the grass, it must’ve been a weird picture. It was so surreal, you just didn’t know what to make of it. Then we just went back up to the stand and just got changed and stuff. We were literally just talking to each other.”

Covid-19 can stop lots of things and dilute celebrations that are usually helter-skelter, but a global pandemic can’t stop an enthused and ecstatic Irish mammy. Mammy Malone, along with her daughter-in-law and grandchildren, managed to break their way into Wexford Park to celebrate with her sons.

“They were watching the match at home, on the telly, and the minute the whistle blew, they drove straight and came to the park. They just walked straight in the main gate, and it was actually brilliant to see them because we were like, ‘Wow, what the hell are you doing here?’ It was great seeing them, but it’s those little moments that you miss, like the crowd running in, the scenes in the dressingroom afterwards. It’s little things like that you miss,” explains Malone.

Aside from on-field celebrations, or lack of, the general tradition is to bring the cup back to each of the three villages forming part of the celebrations. Usually, this is a time where club secretaries or officials are scrambling to get trailers or backs of trucks for the team to parade on. Again, Shels couldn’t technically have such gatherings, but the club got inventive.

As they were going over the bridge back home (Malone playfully tells me these scenes also greeted Naomh Éanna à la Anfield greeting Man City) fans gathered socially distantly along the bridge and throughout the villages to welcome home their team.

“None of us knew about it. Those scenes were absolutely incredible, and then after the match, they had arranged that we got in a little convoy and all drove behind each other. We drove through each village. There were people in each village cheering us on and shouting. There was beeping the horns, lads hanging out the windows.” Same, same, but different.

While there’s no going forward after winning your county due to the current cramped calendar, Malone is turning his focus onto the football championship. While there were plenty of eyebrows raised when the Wexford county board decided to split the club season into hurling and then football, Shelmaliers were one of the many benefactors, allowing players to focus on one code without having another interfere.

“It suits us now. We’re obviously one of many dual clubs, and it suits us going five weeks at hurling, and then the five weeks football. Then going into intercounty then. I’m just playing club championships, hurling and football for five weeks each. If you’re bouncing between codes, you’re losing your hurling first touch and footballing skills too.”

If there wasn’t a global pandemic, Malone states the current format isn’t exactly accommodating for anyone, especially the current batch of intercounty stars. Nobody wants to be pulled apart with various commitments, and as Malone firmly states, all the players want is a calendar where players can plan through their time off. Both club players and intercounty players.

For now, Wexford must be content with a straight knockout championship, and while Malone laments that chances are it’ll be the one or two games for them once they wrap up their league campaign. He is one of a few players in the labelled ‘lower league counties’ that actually doesn’t mind a two-tiered championship.

“I suppose in an ideal world you want to play against the Dubs, the Mayos, and the Kerrys, just to experience it. In realistic terms, as Wexford are a Division 4 team, actually, with the two-tiered championship we are going in with a mentality of ‘yeah, we are going to actually win something’, or we can be competitive even. You’re not going out in the first round to Dublin after you got hammered and then you’re in the back door then.

“You only have one or two games to have a good run. You might get a good run, but it’s not set up that way in a one-tiered [system]. You don’t want to be training hard all year to get hammered and then knocked out. Whereas in a two-tiered system, you can get to All-Ireland finals more easily, so, realistically, it is probably better.”

Wexford got off to a bit of a hectic start under former Kerry player Paul Galvin. Daithí Waters and last year’s captain Michael Furlong were dropped and were soon followed by Kevin O’Grady and Tiernan Rossite who apparently left the panel in solidarity. Malone admits that training that night was “weird and awkward”, and it was only when he saw the four boys leaving the WhatsApp group chat, he realised things were a bit serious.

But, that’s all behind them. As he admits, younger players like Malone have to step up, and he says that the current regime under Galvin and his management is going really well, citing the input of sports psychologist and former Mayo footballer Austin O’ Malley.

“He’s one of the best I came across. He works with Enda McNulty, so he’s getting all these things from him. He’s absolutely incredible. We have a chat before training and stuff. He’s always on the phone if you want to call him. Before a match, he’s just unbelievable. He’ll just be saying stuff, and you’re just like, ‘Oh my God, I’ve never heard that before’.

“It’s massive how a good sports psychologist can impact you. There are times when people come in here, and they’re not great at getting what you want out of the team, but Austin, he’s in a level on his own up there. He’s played for Mayo there for years as well. He knows what he’s talking about in terms of GAA as well.”

Growth is a subject that comes up frequently throughout our conversation, and one thing is for sure, be it personal growth, skills or growth as a team, Malone has found himself become a leader in a young Wexford panel.

Still only 24, he already understands how to maximise his efforts and those on his team. All going well, Wexford hope to regain some status among the big boys of Gaelic football, and with a firm club scene behind him, trainers and management who now understand what Wexford wants, needs, and can aspire to, Malone hopes to be at the forefront of Wexford resurgence in a not too distant future.