Referees enjoying the peace and quiet as well as more interaction 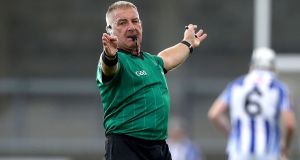 There have been positives for referees in the strange circumstances of this year, including the absence of spectators. That’s according to Donal Smyth, the GAA’s national match officials manager.

“Confusion has probably cleared up a good bit,” he says, “because there are no crowds at games, shouting at referees when they blow the whistle. The people at games now probably know the rules that bit better even though in an empty ground you can hear more clearly and some of the team benches wouldn’t be that quiet!

“Overall, things are going pretty well and they’re glad to be out refereeing, even if the stakes have risen in recent weeks with teams not just happy to be out playing but anxious to be winning.”

He also cites improved supports for match officials in charge of club fixtures, who have had greater access to advice with the concentration on county schedules.

“There have been some issues, mostly to do with the advance mark, but we’ve made ourselves available to talk to anyone who has a query or who would like to discuss an interpretation of rules or get some advice on a decision they made during a match.

“That along with the videos and briefings has meant that we’ve had more interaction with the club referee than we’ve ever had before. That’s been very worthwhile because everyone makes mistakes but the referee’s bible is that you don’t want to make one that costs some team the match.”

The lack of crowds has had another unanticipated impact because of the widespread streaming of matches from virtually every county.

“The other plus for referees and officials is the number of games that can be seen on television or through streaming. This has meant they’ve been able to keep themselves up to speed on specific issues and see how different officials have been dealing with them.”

Smyth is also an advocate of the new water break, designed to allow players access to their own drinking bottles in the middle of each half.

“The water break eliminates things that were going on around the field like people running on with bottles. For me that’s been an improvement.”

Criticism that the stoppage results too often in momentum switches strikes a nostalgic chord from his playing days as Meath goalkeeper during the experimental rules of the NFL 30 years ago, which included trialling the division of a match into four quarters, but he doesn’t believe it’s a major problem.

“No, I think managers know when the break is coming and plan around it.”