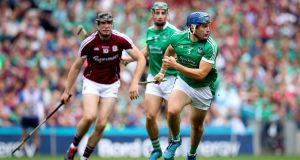 Mike Casey: back in the Galway squad for the league semi-final clash against Dublin at Nowlan Park. Photograph: Ryan Byrne/Inpho

Having trailed each other through the last 10 years of slightly sub-prime hurling performances, the relationship diverged last year with a heavy beating for Dublin in the league and of course an All-Ireland for Limerick.

To date John Kiely’s team have been the leading side in the competition with just one defeat and a string of impressive victories, showcasing the depth of the county’s panel with 32 players fielded over the six matches to date.

A strong selection is anticipated with two-thirds of last September’s team likely to start. In that respect there was also good news for the county with the return to training after injury of Na Piarsaigh pair, full back Mike Casey and impact centrefield replacement Will O’Donoghue.

They return to the scene of their signature performance, last month’s first win over Kilkenny at the venue in 22 years. Sunday’s semi-final would be the penultimate step along the road to becoming the first county outside of Kilkenny to add the league title to a Liam MacCarthy since Galway 30 years ago and to reach a first final since 2006.

Dublin have also had an encouraging campaign and are looking for their first title in eight years. Finishing top of Division 1B represented a great start to his debut season for manager Mattie Kenny, which he followed with the county’s first win over Tipperary in Thurles since the 1940s.

The composure Kenny praised in his team will be useful at the venue where Dublin blew a 12-point lead in their most recent league semi-final, against Cork four years ago.

Two weeks after the Sunday of the big wind, which saw substantial leads overturned in the second half up and down the country, including Waterford’s overhauling of Galway, the counties meet again not having played previously since the All-Ireland final of two years ago.

Galway have auditioned a few hopefuls without the stage door being blown off its hinges and the unwelcome news is that one likely recruit, Fintan Burke’s, season is in doubt after his injury in the club final with St Thomas’s.

Micheál Donoghue is missing half of his All-Ireland side from last September but on a more positive note, has Joe Canning in exceptional form this early in the year.

Waterford though have been in great form. If there was an inclination to put the Galway win down to the howling elements, last week’s demolition of Clare can’t be explained away. The team is enjoying the less structured game plan of Páraic Fanning’s new management and Stephen Bennett, his career apparently stalled by injury, has been thriving at full forward.

Last week he was 0-16 from 17 attempts whereas the team hit 31 of their 34 scoring opportunities.

With Daithí Burke not back yet, Galway might struggle at full back. Gearóid McInerney did a job on Conor McDonald, who had been troubling Paul Killeen, but Bennett is a different type of player.

This could go either way. Although it’s possible that Tadhg de Búrca may get a run off the bench, most of Waterford’s absentees are in defence and that might tilt it the way of the Westerners.