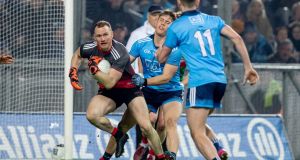 There’s a conservatism that runs through the GAA like the Great Atlantic coal seam. For decades, it has been reflected in tactical and personnel switches. Hooking a corner forward became the running joke of the stock change a manager made when he wanted to be seen to be doing something without risking any major consequence.

It was against such conservatism that Mayo’s decision to change goalkeeper on the day of the 2016 All-Ireland final replay was, and still is, regarded as so radical. There had been “word” around the Jones’s Road and the corridors of the Croke Park Hotel on the day of the replay that Stephen Rochford was thinking of going nuclear in his selection by going with Rob Hennelly over David Clarke, who had enjoyed an All-Star calibre summer.

You can see a kind of edginess in the normally relaxed John Maughan when he is asked about the “dramatic” switch in the pitchside television presentation shortly before throw-in, shifting from side to side as he tries to imagine the dark portents it might hold. “It is dramatic,” the former Mayo manager conceded at that moment.

“I’m a fan of both incidentally. I thought David Clarke is a top-class goalkeeper but then Robbie has wonderful experience as well. Now, the rumours circulated outside in the last 20 minutes that David had picked up an injury. But I’m surprised to see that Stephen made a decision of this magnitude, dropping David Clarke who has been exceptional, albeit he had a sticky patch for about 10 minutes the last day. A couple of his kicks out went awry.

“That said, there is word circulating as well that Cillian O’Connor has been carrying an injury and maybe Robbie has been introduced for long-range frees or something. I am a bit surprised but at the same time: buckets of experience.”

It was a composed summary of the deluge of conflicting thoughts running through Mayo minds at that moment. Everyone knows what happened in the final. The abbreviated version of that All-Ireland is that Rochford changed goalkeepers and then Dublin won. Hennelly certainly had a horrendous moment that day, fluffing a straightforward catch, reacting in horror as the ball fell straight into the hands of the lurking Paddy Andrews, tripping him and then standing as an observer to his own disaster.

Penalty. Black card. Hennelly leaves the stage distraught and Clarke comes back in, unable to do anything about Diarmuid Connolly’s icy precision from the penalty area but assured thereafter. Dublin defended their All-Ireland title on a score of 1-15 to 1-14 and that was that.

The ramifications of that decision are still being felt. They were brought into sharp focus on February 23rd when Hennelly had his first game in Croke Park against Dublin since that traumatic final. For most of the world, the three-year-old replay is a vague memory – Dublin and Mayo provided another firecracker the following year. But for Hennelly, it has been different.

On the Monday after the replay, he made a public statement on social media thanking his team-mates and the public for their support and promised that his Mayo career wouldn’t end on that note. “I don’t know where I’ll be in a years’ time but I do know that I’m not going to give up.”

It might have been a hollow vow. His experience would have convinced plenty of players to slip quietly away. Goalkeeping is unforgiving. Mistakes are magnified. The magnitude of that error followed Hennelly and reportedly drew hostile remarks from the terrace when he lined out for Breaffy in the local championship that autumn.

His appearances were limited in 2017: Clarke started seven league games and 10 of Mayo’s championship games in an epic run that ended with another nerve-wracking loss to Dublin. In 2018, Hennelly started in the league against Dublin and Kildare and that was it. But he hung around and James Horan, who gave Hennelly his debut as a 20-year-old in 2011, has fully revived his career.

It’s hard to underestimate his importance to his team in Dublin last month on a night when Mayo’s outfield unit absolutely flat-lined. It wasn’t just the six terrific stops on goal attempts the Dublin forwards would have expected to score: he contributed 0-2 from placed balls, including a 60-yard free and was successful in 18 of his 21 kick-outs. He was assured in collecting three shots that dropped into his goal area. But for Hennelly Mayo would have been routed and possibly humiliated on the scoreboard.

Of course, it was possible to see, watching that performance, what had tempted Rochford to make such a radical move three Septembers ago. It was Rochford’s first season in charge. It was generally forgotten during the volleys of criticism he received afterwards that Hennelly had been instrumental in earning Rochford’s first significant win.

Mayo had lost three successive league games to Cork, Dublin and Donegal when they went to Clones that March to face Monaghan. Rochford had come into the job after the controversial player putsch against Pat Holmes and Noel Connelly. It was a tough start and four losses on the spin would have placed him in an uncomfortably hot spotlight. Two late frees from Hennelly gave Mayo a 2-11 to 1-12 win and they settled into the season.

Maybe on eve of the replay Rochford had had a good feeling about Hennelly. The rationale – that his phenomenally long distribution from kick-outs could neutralise Dublin’s high pressing game – did make sense. There was logic behind the gamble: had it worked, it would have been hailed as the unique and fearless tactical masterstroke that enabled Mayo to end 60 years of failure.

It didn’t work. Instead, it went down as one of the few blots on Rochford’s copybook over a three-year term which brought two All-Ireland final appearances. And Clarke was the All-Star goalkeeper in both of those years. That’s what made Rochford’s switch inexplicable to many. He dropped a deeply experienced goalkeeper who was in the form of his life when, strictly speaking, there was no need to do so.

If there is a popular theory that Dublin now have the structure to perpetually replace one top-class player with another, then Stephen Cluxton is the exception. It’s generally accepted that the reticent Parnells man has had a profound influence not just on goalkeeping but on the outfield game. It remains to be seen how Dublin will cope whenever he steps away. That Clarke managed to win two All-Stars in the Cluxton era, a period teeming with quality goalkeepers like Rory Beggan and Niall Morgan, is a special achievement.

And it confirms one thing: Mayo are both blessed and cursed to have two such talented goalkeepers at the one time. Clarke has been around Mayo senior squads since Pat Holmes brought him in as a 17-year-old back in 2001. Hennelly’s elevation to senior level a decade later created the kind of scenario that sometimes occurs in the tussle for the number 10 jersey on the Ireland rugby team: two deeply talented players competing for one spot.

James Horan’s return has re-invigorated that debate. The Dublin game was Hennelly’s third start in four league games. He started in the wins against Roscommon and Tyrone. Clarke came in for the next game against Cavan. The apathetic nature of Mayo’s display against Dublin led to the usual knee-jerk conclusions about their All-Ireland aspirations.

But there was a fortnight break between the Cavan game and that Dublin match. One can only guess at how Mayo used that fortnight of training. The one player whose performance was worthy of automatic selection was Hennelly. Instead, Horan went with Clarke next time out as Galway continued to hold the Indian sign over Mayo and then stuck with the Ballina man for their eye-catching victory in front of an expectant Kerry crowd in Tralee.

In the 71st minute, Clarke left the field injured and was replaced by Hennelly for a taut six-minute period of injury time. This time, the switch was seamless. It leaves Horan spoilt for choice as he considers his materials for the next attempt at breaking the speed of sound. Irrespective of who starts in goal against Monaghan in Castlebar on Sunday, there is a sense that Mayo are in safe pairs of hands.