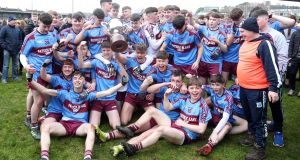 The Fermanagh side dominated for three quarters of an entertaining Athletic Grounds decider, the only blemish on a highly impressive performance the concession of two second-half goals.

Inspired by captain Brandon Horan at midfield and powerhouse centre back Josh Largo-Ellis, Dominic Corrigan’s side led from start to finish, and never doubted themselves even when their opponents narrowed the gap to two points midway through the second half.

After that they never looked in danger of losing.

McBrien fired over five first-half scores, four of them from play, while Michael Glynn contributed four points, one of them from a penalty, with his kick flying over the bar as he lost his footing in the 13th minute.

Omagh were restricted to rate attacks, and scores from Simon Garrity , Mark Hayes and Daniel Fullerton didn’t come close to keeping them on contention.

Towering performances from Largo-Ellis and midfielders Horan and Joe McDade kept the Fermanagh lads on the front foot, and they were well worth their 0-11 to 0-3 interval lead.

But Omagh out-scored their opponents by 1-3 to nil on the third quarter to narrow the gap to two, their goal coming from a Fullerton penalty.

St Michael’s got men back to defend a slender lead, raiding on the breakaway for McBrien to seal the win with his eighth point of the contest.

Subs: S McDonagh (1-2) for Donnelly, B Conway for E Montgomery.