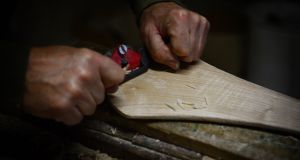 The craft of hurley making has written references to it in the 5th century. Photograph: Bryan O’Brien

The art of hurley making is not an art at all, Minister for Finance Paschal Donohoe has decreed, as he ruled out including the ancient craft in tax breaks.

Brought in by Charlie Haughey almost 50 years ago, the artistic tax exemption scheme allows writers, painters, musicians and sculptors to earn up to €50,000 a year tax-free if their work is recognised as having “cultural or artistic merit”.

Asked by Fianna Fáil TD Kevin O’Keeffe if he would consider including Ireland’s 200-odd hurley makers in the scheme, Mr Donohoe said “the activity described does not fall into the realm of artistic endeavour”.

Albert Nevin, the third generation of his family to make hurleys at Shannon Harbour in Co Offaly, believes he is no less than a sculptor who transforms a plank of timber into a bespoke work of art.

“Pascal Donohoe possibly doesn’t realise the amount of handcraft and work that goes into making hurleys,” he said. “I wouldn’t mind meeting him to show him.”

Mr Nevin, also chairman of the Irish Guild of Ash Hurleymakers, said “a hurley is sculptured and tailored for an individual so it feels like an extension of their arm.”

“You can’t mass-produce hurleys, because everyone is different and there is no one size fits all,” he says.

The craft is thousands of years old, says Mr Nevin, and holds a distinctly unique place in Irish history and folklore, with written references to it in the 5th century during the time of St Patrick and in the mythical exploits of Cú Chullainn.

However, Mr Donohoe said the artistic exemptions under section 195 of the Taxes Consolidation Act apply only to certain earnings of writers, composers and artists for artistic works, namely: a book or other writing; a play; a musical composition; a painting or other like picture; and a sculpture.