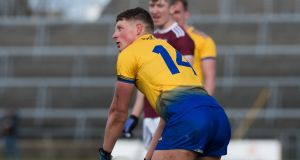 Conor Cox: has impressed during the league as the main scoring threat for Roscommon. Photograph: Evan Logan/Inpho

Derry v Wexford, Bellaghy, 4.0
The divisional winners take on a disappointing Wexford in what should be the sign-off for the league’s only 100 per cent record. Verdict: Derry

Leitrim v Waterford, Páirc Seán Mac Diarmada, 4.0
Leitrim’s fine season has been recognised by promotion and Terry Hyland’s Manager of the Month award but stealthily Waterford have climbed to third in the table. They can’t go any farther but it’s a decent showing. Verdict: Leitrim

Cavan v Dublin, Kingspan Breffni Park
Dublin get that disinterested feeling for the first league in seven years but after Jim Gavin’s unusually public criticism, the players will be on notice for this.

Cavan’s hopes of survival dangle by a gossamer thread and manager Mickey Graham has conceded that relegation is their likely fate.

Despite being competitive in a number of fixtures, he identified poor use of the ball both in shooting and distributing as the main problems for the team.

Dublin’s own accuracy statistics were surprisingly poor against Tyrone and their inside-line defence was again exposed by their opponents’ use of early ball. Plenty to work on for Gavin and despite being becalmed, a reaction can be expected.  Verdict: Dublin

Mayo v Monaghan, MacHale Park
Over the past three years this has been a tight fixture with no more than a score in it although in 2015 Mayo administered a thrashing.

Both sides have it all to play for here – the locals chasing a place in the final and Monaghan wanting to dismiss the faint chances of relegation – after decent wins in the penultimate round but Mayo’s Tralee take-down of previously 100 per cent Kerry has pride of place.

After two very disappointing results, James Horan will have been relieved with that win but conscious that it has to be followed up, as a place in the league final is on the cards. Matthew Ruane and Fionn McDonagh have been the most eye-catching of the newcomers. Whoever wins would need results elsewhere to click into place but the home side have the bit between their teeth. Verdict: Mayo

Roscommon v Kerry, Dr Hyde Park
Roscommon were outgunned by Galway last week and unfortunately for them, Kerry are next up hoping to atone for their first defeat of the campaign last week.

Peter Keane must be pleased with how it’s gone with a fluid enough selection policy and anything – or potentially even nothing – out of this confirms their place in the final, for the third time in four years.

Roscommon need something to get out of the relegation clamp. Their top-performing forward in the absence of the Murtaghs has been Kerry émigré Conor Cox but their defence is too loose – second worst in the entire league – for comfort with the visitors getting ready to start David Clifford’s season.  Verdict: Kerry

Tyrone v Galway, Healy Park, [TG4 YouTube channel]
Results in this division have been a bit topsy-turvy so the fact that Tyrone are fresh from beating Dublin needn’t overly-inhibit Galway, who have been effective – apart from in Croke Park – during the campaign.

They are one of two counties with their fate squarely in their own hands but Tyrone’s improvement has been striking and the greater variety in their attack really impressive.

On one level it’s a match made for Kevin Walsh’s more cautious impulses but like Mickey Harte’s team, Galway have plenty of attacking upside if not even more than Tyrone although they’re not back to a full pick yet. The visitors’ recent away form has been impressive and they have a shot here.  Verdict: Galway

Division Two Armagh v Cork, Athletic Grounds
The crisis in Cork moves to a new level in this contest, which is almost certain to relegate them to Division Three for the first time in the modern era. Armagh’s season will be static but that beats the plight of their opponents.  Verdict: Armagh

Donegal v Kildare, Ballyshannon
The cards fell so that Cian O’Neill’s team would have to travel to all three of their promotion rivals with so far nothing to show for it. This will be the decisive fixture, as Kildare must win and even then nothing is guaranteed – and neither is it for the Ulster champions, surprisingly erratic this campaign. But Declan Bonner’s team are in a stronger position and should take the points.  Verdict: Donegal

Meath v Fermanagh, Páirc Tailteann
Meath have had a good run and are virtually guaranteed promotion, regardless of how this first-versus-third clash goes. Fermanagh’s limited but effective game plan is fine until they have to chase a match, a scenario Meath should be able to conjure.  Verdict: Meath

Tipperary v Clare, Semple Stadium
This is one fixture that kind of suits Cork because if they win and end up in a head-to-head with Tipperary, they’ll come out on top; otherwise they’re goosed, as are the losers here. Tipp just about get the nod here, which relegates Clare.  Verdict: Tipperary

Down v Louth, Páirc Esler
A local, if cross-province, rivalry sees Down likely to finish a solid campaign with a bounce-back promotion whereas the visitors, who have had a decent season still have the chance of making headway, albeit a path complicated by the outstanding match with Westmeath. Unlikely to come to that. Verdict: Down

Laois v Carlow, O’Moore Park
Another high-profile meeting between neighbours, who contested last year’s Division Four final. Both need something, Laois to advance their promotion hopes and Carlow to avoid probable relegation, which would be a poor reward for a competitive campaign.  Verdict: Laois

Sligo v Offaly, Collooney
It’s been a horror show for Sligo, who on their way down have provided the most hospitable defence in the league. Hard to see Offaly failing to take advantage.  Verdict: Offaly

Westmeath v Longford, TEG Cusack Park
Another local feud, this time in the midlands, and a win for the home team will activate their outstanding fixture with Louth as a live issue. Longford have done well but there’s more at stake for the home side.  Verdict: Westmeath

Limerick v Antrim, Kilmallock, 1.0
– Antrim’s campaign has been undone by a succession of narrow defeats, a trend they can halt in this but to no great avail.  Verdict: Antrim

Wicklow v London, Aughrim, 1.0
The losers here will almost certainly have the dubious distinction of propping up the league. Chances are that an already harrowing week for London won’t get any better.  Verdict: Wicklow

1 Ian McKinley: ‘You do take for granted the simple things in life’
2 Nicholas Quinn: ‘Swimming became how I dealt with grief’
3 James McClean still failing to learn his own online history lesson
4 Reality Bites – Tales from the new normal: Caitríona Cormican
5 Matt Williams: We all need a bit of Bud Maher’s resilience right now
Real news has value SUBSCRIBE

Michael Walker: Carrying space and the benefits of learning to stand still 08:00
Matt Williams: We all need a bit of Bud Maher’s resilience right now 07:00
Ian McKinley: ‘You do take for granted the simple things in life’ 07:00
Reality Bites – Tales from the new normal: Caitríona Cormican 06:00
Nicholas Quinn: ‘Swimming became how I dealt with grief’ 06:00
Crossword Get access to over 6,000 interactive crosswords